Canada has a weak hand as NAFTA re-negotiations begin. More attention needs to be paid to the challenges weighing down the Canadian export economy

Canada is a mid-sized economy, responsible for less than two per cent of global production of goods and services – a proportion that has fallen gently over the last decade or so. And we represent about eight per cent of all economic activity across the United States, Canada and Mexico combined.

Canada is also an open economy, meaning we depend heavily on cross-border flows of trade, investment and knowledge to underpin our high standard of living. To pay our way in the world, Canada must sell commodities, manufactured goods and services to other markets.

Identifying the industry sectors where we can strengthen and expand export capacity requires we begin by examining what Canada sells to other countries today.

Last year, Canada exported $521 billion of goods, along with $102 billion of services – for a total of $633 billion in foreign sales. Figure 1 below breaks down our goods exports by broad category. 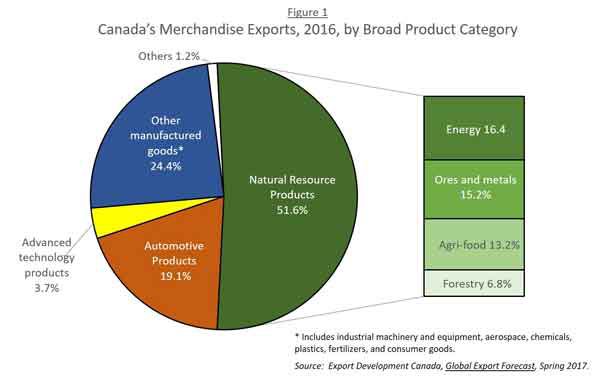 Natural resource-based products continue to loom large in Canada’s export profile. Added together, energy, minerals, metal ores, forest products, and agri-food and fish made up slightly more than half of all Canadian goods sold abroad in 2016. Within the natural resources sector, energy provides the biggest slice of exports, with oil ranking as the country’s top export commodity.

Outside of natural resources, motor vehicles and parts stand out as contributors to Canada’s export success, with close to $100 billion in foreign sales last year.

Added together, natural resource products and motor vehicles and parts comprise more than 70 per cent of Canada’s total merchandise exports.

The first hard truth about Canada’s trade, then, is our disproportionate reliance on a handful of industries to sustain the export economy. Most other advanced economies – the U.S., Britain, Germany, France, the Netherlands, even Italy – exhibit greater product diversity in their export mix.

The second hard truth is the marked concentration in the countries we trade with. 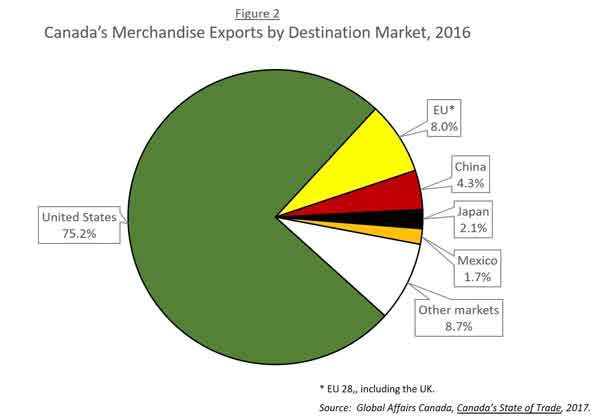 In 2016, 75 per cent of goods exports were shipped to the United States; at the same time, the U.S. supplied two-thirds of our merchandise imports. America is also the final destination for 55 per cent of Canada’s exports of services – a fast-expanding part of our overall trade.

The American-centric nature of Canada’s trade is problematic, given projections suggesting the U.S. will account for dwindling shares of both global consumption and world economic growth in the decades ahead. And for the Canadian business community, it provides a sobering backdrop as talks get underway to overhaul the North American Free Trade Agreement (NAFTA), which President Donald Trump has criticized as contrary to America’s economic interests.

The final hard truth centres on Canada’s lacklustre trade performance. Exports of goods have grown only modestly since the middle of the previous decade, reflecting not just shifts in commodity markets, but also an erosion of Canada’s relative competitive position across a swath of manufacturing and natural resource industries.

In fact, since 2008 the value of Canada’s merchandise exports has risen by a meagre three per cent. Lower oil prices are a significant part of the explanation, but the softness in exports is also evident in sectors such as electrical/electronic equipment, chemicals and plastics, metal ores, and metal and mineral products.

Fortunately, we have done better on the services side, with the value of service exports rising steadily over time. But this hasn’t been enough to offset the sluggishness in goods trade.

So Canada’s position as NAFTA renegotiations begin is compromised.

Our basket of merchandise export goods looks to be insufficiently diverse, we are inextricably tied to the American market at a time when protectionist sentiment is on the rise there, and there’s concern about Canada’s ability to attract business investment and the high-value corporate, professional and technical jobs that go with it in today’s increasingly competitive global economy.

Government policy-makers at all levels need to pay more attention to the challenges weighing down the Canadian export economy.