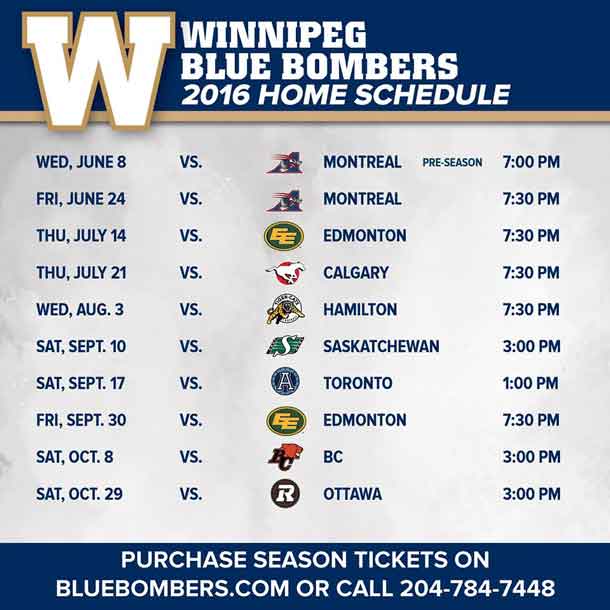 WINNIPEG – SPORTS – Another sure sign winter is ending. The Winnipeg Blue Bombers have announced their 2016 Football Schedule. “We’re very pleased overall with our schedule for 2016,” said President and CEO Wade Miller. “We are pleased to have all evening games starting after 7:00 pm for our fans, and the CFL worked extremely hard to accommodate all teams as best as possible.”

The Blue Bombers will kick off the 2016 regular season at home when they host the Montreal Alouettes for Friday night Football on June 24th at 7:30 pm CT. This will be the fans’ first chance to see a revamped roster in regular season action that includes Weston Dressler, Ryan Smith, Justin Medlock and Keith Shologan, all with starting quarterback Drew Willy back under centre.

The Bombers will then head out for two games on the road before returning for a mid-July clash with the Grey Cup Champion Edmonton Eskimos. In all, the Bombers will have one regular season games on Wednesday, two on Thursday, three games on Friday, and four Saturday home games in the fall.

The regular season Wednesday night home game will take place on August 3rd against the Hamilton Ti-Cats to make way for the 2016 Summer Olympics broadcast on TSN.