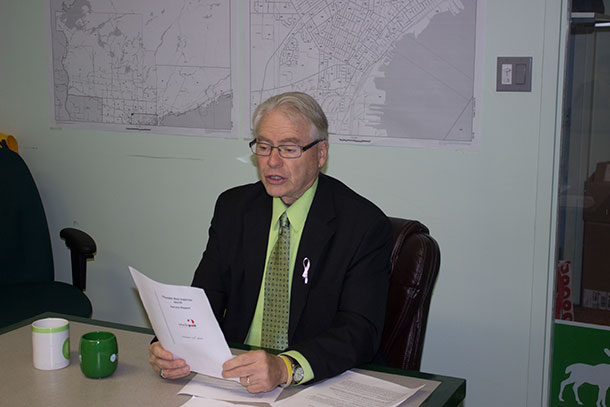 THUNDER BAY – Thunder Bay Superior North Green Party candidate Bruce Hyer says that “The undecideds will decide this election”. Hyer states that the Green Party commissioned a poll that is the only poll that really shows what is happening in the riding. The deputy leader of the Green Party states that he is “In a three-way political battle with the Liberals and New Democrats”.

Hyer stated: “I am heartened by this poll. No voter who wants Harper out needs to worry about vote-splitting in this riding! The only real poll is on Monday. I will wait with great interest to find out if I have been rehired… and if our next MP is Hyer, Hajdu, or Foulds. All good people! Tom Mulcair and the NDP certainly are doing their own polling, and are frantic that I may win (remember his asserting that “I guarantee that the NDP will win back our seat in TB-SN” quote when he came here?). This OraclePoll certainly shows that the NDP’s outrageous claim in various media that it is a tight race here between Harvey and Foulds is a bold lie. I predict that there may be more desperate moves by the NDP here.”

“There is only one poll that really counts,” said Bruce Hyer, incumbent MP and current Thunder Bay-Superior North (TB-SN) candidate. But in the interim, in order to gauge the attitudes of current voters, the Green party commissioned an October 8-10 opinion poll (advance polling weekend) by OraclePoll. The margin of error for this scientifically designed 300-person survey is +/- 5.6 %, 19/20 times. Oracle, one of the most highly regarded polling firms in the country, asked constituents three simple and direct questions.

Hyer says that unscientific polls are skewing the voter perceptions in the riding, with some polls putting the Green Party numbers at less than five percent.

The incumbent MP states that his numbers are solid, and that this race is a tight one between the Liberals and New Democrats.

1) Do you agree that Bruce Hyer has been a strong and hard-working representative of your community over the past 6 years?

2) Do you agree that Bruce Hyer deserves to be re-elected as your MP?

3) If a Federal election were held today, which party and its Candidate in the riding of Thunder Bay-Superior North would you most likely vote for or be leaning toward at this time?

The Greens say, “With virtually no local actual polling in most ridings across Canada, some national pollsters have been predicting an NDP win, extrapolating (guessing, really) from past elections, particularly 2011. In 2011, Jack Layton and the NDP received 30.6% of the national popular vote; Hyer (then running for the NDP) received 50.15%, running 20% ahead of the national party. National pollsters see those numbers and erroneously assume that the NDP will again be in the lead. That is a very dubious assumption, either being unaware of the local realities, or choosing to ignore them.”

“One thing is very clear”. Hyer said. “Richard Harvey is a brave candidate, but this is a three way race”, said Hyer. “This gives people the freedom to vote with their head and their hearts for the non-Conservative Member of Parliament whom they believe will best represent their interests in Parliament. Especially interesting is that 28% of eligible voters are still undecided. The undecided will decide!”

Hyer challenged the other parties to release their internal poll numbers.

The Green Party Deputy leader states that based on the responses at the door, he is greatly encouraged by the support. Hyer is also encouraged by the increased number of young people signing up to vote at Lakehead University as well has some very massive support from First Nations voters.

Green Party Says Under Their Plan a 60% Reduction by 2030

Green Party – It is our duty to care for seniors