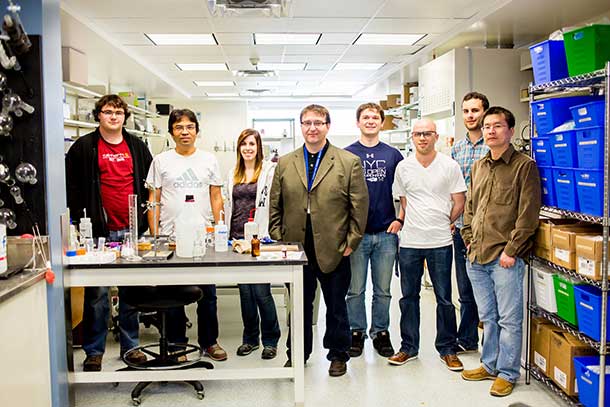 THUNDER BAY – LIVING – Gemcitabine is a type of chemotherapy agent used to fight certain cancers. Oncologists know that it will work better in some patients than others, but what they can’t do is accurately predict which patients will benefit. That could change thanks to a new international clinical study that Dr. Chris Phenix and his team have joined.

The study hinges on a high-tech robot called Elixys that is programmed to safely and consistently prepare positron emission tomography (PET) probes fit for human studies. These probes allow scientists to observe the metabolism within a tumour. We know that gemcitabine is most effective in patients who have high tumour levels of a protein called dCK. To test for this protein, a probe called 18F-FAC is injected into the patient. When dCK is present in high enough concentrations, the tumour will “light up” during a PET scan – which could be a positive indication for gemcitabine therapy. The clinical trial will confirm if this is actually the case.

Traditionally, even established PET probes take months to prepare at a new site due to differences in reagents, batch size, and other factors. “Using the robot, we can probably make a probe in an afternoon, compared to the old days when it might take six months to do manually,” Dr. Phenix said. “18F radiochemistry is notoriously tricky because we are using very small quantities of material.”

It’s also safer for the radiochemist since the robot is remotely controlled.

The collaboration behind the study has even greater implications.

“If we develop a new research probe and it looks like it’s working, I can send it to sites that also have the Elixys robot for them to try it as well,” Dr. Phenix said. “That’s important because if we are using PET imaging to screen for certain cancer sub-types, Thunder Bay would not have a big enough population to support a full clinical trial. So we need other sites to evaluate these future tracers.”

TBRRI is SOFIE Biosciences’ first Canadian partner, joining the company’s network of US research hospitals. That means TBRRI will be able to implement new imaging probes and methods from these network partners, providing cutting-edge healthcare to Northwestern Ontario earlier than otherwise possible. Likewise, advances developed here will already have a pre-built network of clinical trial partners – and eventually buyers if proven effective.

“The technology now allows these protocols to be exchanged quite quickly.”