Home Anishinaabe Nine Walkers Set Out on Trek to Ottawa 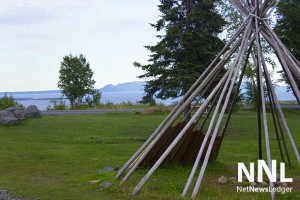 TIMMINS – A small but growing group of residential school survivors and their supporters are walking from Cochrane, Ontario all the way to Ottawa. As they approach Timmins today,they are sharing their message of hope and awareness to the people they pass along their way. They will attend a Pow-Wow at Northern College this weekend before continuing their walk.

The group is led by Elder Patrick Etherington Senior and are known as the Oskapewisk (The Helpers).

Etherington says, “Today, as survivors who now are parents and grandparents, we speak of the overwhelming state that we find ourselves in. Not prepared for these roles as a result of being torn away from our culture and ways. Not being schooled in traditional ways by our role models – our parents and grandparents. Instead, we find ourselves de-humanized, de-moralized and de-spiritualized. Now, our children and grandchildren are reaching out to these affected human beings. We,all of us, are helpers.”

Mushkegowuk Grand Chief Lawrence Martin believes that it is the responsibility of all Canadians to learn about and honour the sad legacy of residential schools. “By joining together in respect of the survivors we can learn from our past and move forward into a better future for our country and all our children. These brave walkers are helping us along that journey and we should do all that we can to support and honour them .”

The nine walkers plan to arrive in Ottawa before the final event of the National Truth and Reconciliation Commission which is being held from May 31-June 3.

The Commission has crossed the Nation gathering testimony from students who survived Residential Schools. These schools were created by the government with the help of churches to separate indigenous children from their culture, language,family and communities.

A Walk for Unity – Regina to Ottawa