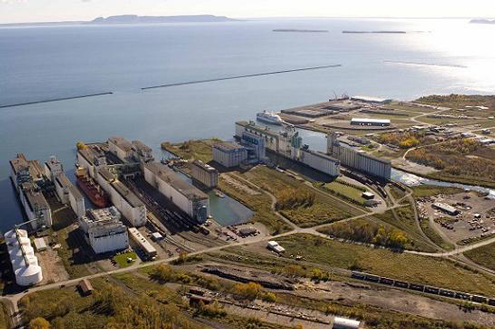 THUNDER BAY – BUSINESS – The shipping season from the Port of Thunder Bay has not started yet. Following last year’s banner year, the signs are there for another good year.

CN Rail says, “Seven months into the current 2014-15 crop year continues its record-setting pace of Western Canadian grain shipments. As of the last week of February 2015, CN has moved on average approximately 4,700 grain hoppers weekly in Western Canada – a full 21 per cent more than during the same period of the record 100-year crop year of 2013-14.”

Claude Mongeau, president and chief executive officer adds “We are proud of CN’s grain-hauling achievements, setting new records basically every month over the last year. Our commitment to deliver service to Canadian grain growers is solid, and the result is a meaningful contribution to keep the end-to-end grain supply chain in sync in Western Canada”.

Getting to crop to market is important for CN Rail. The company has been facing some negative media coverage across Canada and in Thunder Bay.

Train derailments in Northern Ontario have First Nations leaders and community leaders seeking change in how oil is shipped by rail. In Thunder Bay, the company has headed to court with the City of Thunder Bay over the James Street bridge.

The company however is looking to the positive.

“Contrary to claims recently made by the new Ag Transport Coalition that CN is somehow failing to meet demand, we know we’re responding very efficiently to all the demand from our customers. The facts are clear, when we compare our shipments with all valid car orders, our wait-list stands at less than 2,000 orders, just a few days’ worth of car supply. And we would have the hopper car capacity to handle more grain right now if the waterfront terminal capacity was more fluid on the West Coast.” (1)

Last week marked one year since the first Government of Canada Order-in-Council (OIC) that imposed minimum grain-hauling requirements on major railways. In the 12-month period since then, CN’s cumulative tonnage of Western grain has exceeded its mandated volumes by close to 2.5 million metric tonnes, or 10 per cent.

The railway, in a media statement says “CN has consistently said that minimum mandates were unnecessary for it to move record grain volumes. Indeed, CN has delivered as promised on its pledge of strong performance to Ottawa last winter, and believes the OIC should not be renewed when it expires on March 28, 2015.:”

CN today also announced the third round of its innovative Commercial Fleet Integration Program (CFIP). CFIP is for shippers who want to supply privately owned or leased covered hopper rail cars for integration into CN’s Western Canadian grain car fleet. These shippers benefit from year-round supply from that fleet when shipping grain to commercial destinations in the United States and Canada. CN is prepared to integrate up to 1,200 private cars in this latest round, for which the bidding deadline is May 8, 2015.

Mongeau said: “The new CFIP continues CN’s efforts to increase capacity for moving Western grain. It offers interested shippers, who are willing to bid to integrate cars into our fleet, with priority in our car order confirmation and service planning processes. It’s a step forward for the grain logistics system and makes good business sense.”