Honouring the Memory of Murdered and Missing Women

THUNDER  BAY – ANISHINABEK – Staff members of the Union of Ontario Indians (UOI) are looking to honour missing and murdered Indigenous women and their families through a new artistic project entitled Blanket of Hope, which will involve the use of 1,181 earrings.

Jody Cotter, HIV/AIDS Coordinator for UOI, explained that the earrings, just one side from a pair, would represent the lost or stolen life of 1,181 missing and murdered Indigenous women in Canada.

“The Blanket of Hope is a blanket that we are hanging one thousand, one hundred and eighty-one earrings on,” Cotter said. “We are showing one earring because it will show that you are missing the other one.”

Cotter explained that the staff at UOI was looking for an artistic and creative way to honour missing and murdered Indigenous women, and to help spread awareness on the issue.

“We got the idea from a couple of other places throughout Canada and the states. They were doing similar ones with moccasins and earring ones. We were trying to look for something to do as well artistically,” Cotter explained. “We decided we would use earrings and put them on a beautiful pink Pendleton blanket.”

Cotter said that the blanket and earrings would symbolize the spirit of missing and murdered Indigenous women combined with the spirit of those who want to help and be the voice for them.

The Blanket of the Hope will accompany Anishinabek Nation Grand Council Chief Patrick Madahbee and Deputy Grand Council Chief Glenn Hare to a meeting in Thunder Bay this February. The Chiefs will be having consultations with around 15 of the families who have been directly impacted by the loss or disappearance of an Indigenous woman.

“We have some families who have actually lost someone or are missing someone. They are invited to the meeting in Thunder Bay, and they going to help them decide what further actions and solutions they would like to see,” Cotter said, adding that the families would also share input on strategic plans to address the issue as well.

Cotter also said that the blanket would be visiting different communities in the Anishinabek Nation to help start sharing the message and spread awareness, as well as to collect more earrings for the blanket.

There are also beading events set up for people to stop by the UOI office in North Bay, ON to create their own to contribute, and to learn more about the project and issue.

Those who wish to contribute to the blanket can stop by the UOI office in North Bay to make their own earring or drop their contribution off, or can send one through the mail to P.O. Box 711, North Bay, Ontario P1B 8J8.

“We are just trying to be respectful,” Cotter expressed. “From what I’ve looked into, it just seems very very sad when we see so many people who have gone missing, like young girls at thirteen, fourteen, fifteen, just on their way home from school and are never seen again. And older ladies as well, I can’t believe there have been even women 80 years of age who have had things happen to them.”

In May 2014, the RCMP released a report entitled Missing and Murdered Aboriginal Women: A National Operational Overview where it was found that there are 1,181 missing or murdered Indigenous women in Canada.

A national roundtable on the issue of missing and murdered Indigenous women will take place in Ottawa on Feb.27. 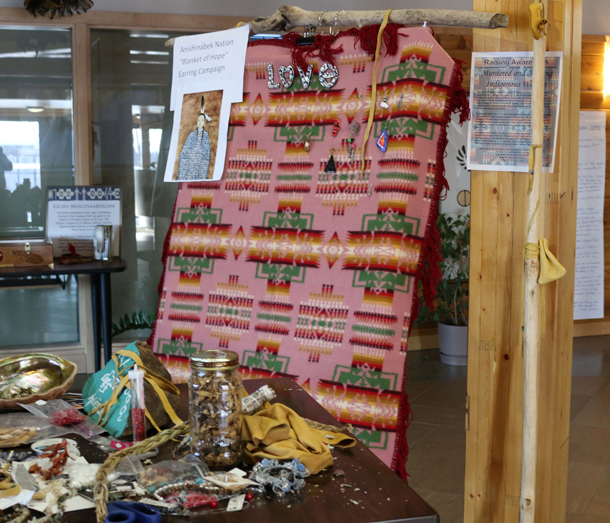