Home Entertainment Whats in the News? We Didn’t Start the Fire! 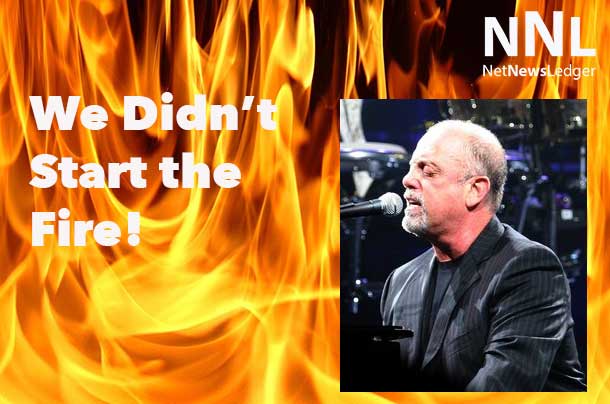 THUNDER BAY – ENTERTAINMENT – Flying recently across four provinces where three major city skylines designate International airports in Winnipeg, Toronto and Calgary a real dis-enchantment hovered watching, listening to, the kinds of news fellow Canadians were saturated with. It was obvious the majority of daily news that’s a global magnet is the kind of stuff where stories, pictures, follow themes of disaster, terror, destruction, the down and dirty goods on who’s messed up in a life that’s gone asunder.

The compulsion to absorb, like a sponge, as much of the daily news predicated on the above was obvious going through screenings before boarding a plane. Then, the arrival in another province mixed with the equally repetitive view of travellers, from around the world, fixated on the sinister seams of what’s falling apart.

These quips overheard. A burly plaid shirted fellow holding his black coffee in one hand, the other a tabloid he read from.

Without care about others around him he barked out, “Mah…guess what?” He looked to her as she trailed him; “a Grizzly ate a man, yesterday, in a park in Alberta.”

Another who’s been absorbed in bold headlines glances up, starts talking to anyone within earshot, “there’s a sniper on the loose shooting in some U.S. state south of Washington, D.C. Another misfit. That makes four I’ve followed this week.”

Or a middle aged chap, who must have missed his calling at the United Nations, looks up from his National Post talking to himself, ” when will John Kerry realize he knows nothing. Does nuttin’ wherever he goes? What a loser.”

I thought, for a moment, what if our Air Ship was diverted to the Moon.

Experiencing our personal landing on a fresh planet that would be devoid of all the earthly news streams. Nothing disseminated via the regular boarding of a plane with a complimentary newspaper.

No earplugs available after finding one’s airplane seat? No available quick-speed news via laptops and iPads. Well what would we make of it? One suspects a pessimistic passenger would immediately take a quick, very nonchalant, glance at a National Geographic photo-of-the-Day vista of setting sun or moon beaming across this new horizon in favour of focusing on something like a left over American moon-walk golf cart In a state of mechanical shambles owing to the barren atmosphere in space bullied by swirling winds and other extremes eroding it.

Hearing, “Well look at what those damn astronauts have already left us to look at.

Why did we pay so much money to come up here?” With these ubiquitous notes in our voyaging I found myself thinking of songs that were, in our time, records of what the world was like. Initially one of those classic pieces was Barry McGuire’s The Eve of Destruction. That was being played on the radio in the early 1960’s. McGuire was a 19-year-old folksinger appearing with the NEW Christy Minstrels.

He first recorded it at a radio station while reading his lyrics from a crumpled piece of paper originally thinking it didn’t rate a recording session. Almost tossed it into the trash. Although he’d once thought it might be his answer to Bob Dylan’s troubadour like verses. Complete with harmonica. Some of his verses were, in two parts: 1. ”The Eastern World it is exploding, Violence flaring, Bullets loading…” 2. (Yet) ‘‘You may leave here for four days in space, but, when you return it’s the same old place…”

It had a riveting effect on everyone. Ed Sullivan had McGuire on his Sunday Evening spotlight several times in 1965 as the song climbed to No. 1 on the charts. However McGuire was once on TV’s musical platform called Hullabaloo where he was introduced by comedian Jerry Lewis.

As those historic times began to involve protestors from every walk and way of American life seeking a solution to more peaceful times. Somewhere there had to be legislators and leaders who could-would reach out a laurel bough of believing in a white dove approach.

Like Gandhi’s non-violent protests that established so many victories in his campaigns in India.

Yet later, as a College student in Europe, we listened to a Simon & Garfunkel tune, which they mixed with splices of a broadcaster reading. They called it the 7 O’clock News.

The excerpts were from the headlines. These would blend in; blend out, as Art Garfunkel and Paul Simon did a duet of Silent Night. Its initial impact was chilling.

So foreboding as Viet Nam’s incendiary documentary footage and its guerrilla warfare was certainly the world’s apocalyptic stage. But I had been thinking of another song in more recent in times as we shuffled from airport to airport. I was recalling verses. Einstein, James Dean, Brooklyn’s Got a Winning Team.

Chubby Checker…Psycho Belgians in the Congo.

Ayatolla’s in Iran Russians in Afghanistan…

And… so its legacy, lasting imagery was temporarily resurrected in the mistiness of my memory. Unable to do a reflex check for it, in our home music library, as our time measured on; I was overwhelmed when I found it in an HMV Store in Calgary. It was at the bottom of a bin. Costing $2. But there it was listed as the No. 5 song on the list of greatest tunes by Billy Joel.

I remembered Billy Joel as being a young New Jersey boxer in his youth. He began his music career with several bands that folded prematurely. Being a former boxer may be part of Joel’s lifelong crusade in ‘punching out’ material that flexed the ropes of containment –traditional chords and orchestrations in music–paralyzing his freedom in expressing things his way.

However, at one point Joel thought he’d performed so poorly in singing something he believed, if anything, he’d only stay in recording sessions by writing lyrics for other singers and musicians.

Like English guitarist Stevie Winwood who was a backup for other Rockers during the overpowering British Invasion of Sixties before Winwood surprised the entire world by coming out with an album where every other song was a Rock & Roll hit for months.

Winwood’s musical merits were breathtaking! So how did Billy Joel write his song? Now that I had chances to hear it a few times inside the cordial studios of workstations in hotels. It was 1989. And during the day of Joel’s 40th birthday a young friend, in his twenties, made the remark how much the world lacked in inspiration. Things were so mucked up.

There was an aura of listlessness everywhere in so many venues in life. It was a commentary reminiscent; Joel began thinking afterwards, of his own youth. That’s all it took for Billy Joel to sit down and begin his stream of consciousness scripting that evolved into his hit song: We Didn’t Start The Fire. Joel began with the year of his birth in 1949 and an intro defining Harry Truman, Doris Day and then Joe DiMaggio.

He was spirited evaluating the world in his “eve of destruction” composition. As he wrote and progressed into the 1950’s Joel was forthright in being interviewed when he noted, “everyone thought the fifties were nothing…but look again… Did you not hear of the Korean War and the Suez Crisis?”

In retrospect Joel said those two opening decades became the framework for the musical structure in his song. It’s well known if he hadn’t pursued music Billy Joel would likely have been one of the finest history professors, or teachers, on planet Earth.

And thus, Billy Joel’s lyrics were finished well before the melody ever received its credence. All things assembled Joel’s song carried listeners, fans, dancers, and emulators and sold out concerts all the way to its greatest accolade. An overwhelming winner of Grammy of the Year after leveling out at Number One in so many countries including Russia where he toured with the tune.

What he wanted to personify in We Didn’t Start The Fire–subtitled, Though We Tried To Put It Out–was a realization that the world is not perfect. That there will always be wrinkles in the foil of your age.

That there will be dis-harmonies in the cataclysmic events that makes up our conglomerate of mankind. That there are hurdles, yet there are inspirational factors merging into our lives all the time.

Hence the song’s passion in describing wellsprings of inventors, actors, artists, athletes, politicians and musicians whose careers does affect the positive. The sunny side of the street kind of echoes in the chorus.

Also Billy Joel wanted to inflect his song with the kind of notions that Harvard Professor George Santayana became famous for. Santayana’s long lasting quote being, “those who cannot remember the past are condemned to re-live it.”

Listening to Billy Joel’s song there’s a swelling of gladness and satisfaction just imagining the elements of goodness within it. These positives take on a special kind of ‘mortal’ divinity when contrasted with eerie, ghostly, somber, or, irrational moments and characters written between the lines. ”Make the best of what you have in your environment,”

Joel advises. ”You may not change things immediately but ways doing what inspires you will in someway affect a better world. I kid you not.”

In one of the last airport lineups I was in, after a very long day in Winnipeg, a song on overhead speakers by the British group: Mumfords & Sons seemed to bring on an un-fatiguing nature to lineups. The Mumfords up welling in voice and spirit carried a musical ambience of distinct hope and brightness to all that sifted out before.

Our family knows the lyrics by heart: Well, I came home… The days of dust, which we’ve known, Will blow away with this new sun…

So raise my hands. Paint my Spirit gold…keep my heart slow… I will wait, I will wait for you. Cuz I will… Wait for you!