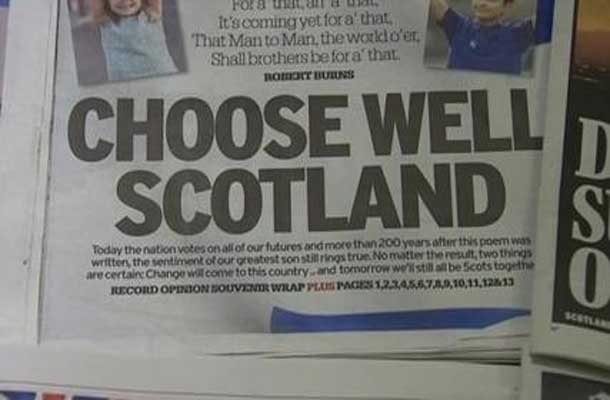 The polls are open in Scotland in a historic vote that could determine the future of the United Kingdom.
Residents are deciding on whether to become independent from Britian. The polls opened under dreary skies in Edinburgh where the first batch of voters willing to speak said they voted YES, for independence.< In Glasgow, the deputy leader of the secessionist party Nicola Sturgeon cast her ballot.... a short while later unionist supporter and former British Prime Minister Gordon Brown cast his ballot. The front pages of Scottish newspapers reminded their readers of the momentous nature of the poll. Opinion on the eve of the vote show a neck and neck contest with hundreds of thousands of voters saying they were still undecided. Results of the referendum should be known by early Friday. VIDEO by Reuters

Scotland – Bid for Independence Shot Down

Why Are Dogs Dying at Overtoun Bridge in Scotland?