MONTREAL, QC – Travel – We aim for the Ferris wheel, but the lineup is a couple hours long. The wait for the 110-metre urban slide, a sort of poor man’s luge, isn’t much shorter. Not a bad crowd for a frosty February evening in downtown Montreal. Clearly, Montreal en Lumière – or, as it’s known in English, the High Lights Festival – is a huge success.

Fortunately, the festival offers plenty of options. We head indoors, to an exhibit by acclaimed Quebec engraver Rene Derouin, and then scurry off for an evening of voodoo rock performed by Boukman Eksperyans, the legendary Haitian band.

Such are the myriad ways of enjoying High Lights. We happily embrace them all. Over the course of our weekend, we enjoy a range of concerts (rock, blues, classical), catch a new play, negotiate the crowds and free attractions along Ste-Catherine Street, sample complimentary cheese from two dozen Quebec fromageries, and dine at great restaurants in a city known for great restaurants.

In fact, food is the high point of High Lights. Nearly 50 restaurants lay on special menus, and each year the festival invites foreign celebrity chefs to whip up special meals that range from late afternoon appetizer plates to a multi-course tasting menu featuring unusual ingredients. Next year, it’s Switzerland’s turn for the culinary spotlight.

Obviously the 10-day event is no secret. One of the world’s largest winter festivals, it annually attracts more than a million visitors, locals and tourists alike. They, like us, know that a festival is the best way to battle winter in Montreal.

But then, Montreal sprouts festivals year round – more than a hundred of them – to nab its status as North America’s festival capital. They range from Formula 1 Grand Prix auto racing to Quebec fashion, from edgy rock to gay pride, from Igloofest (where 8,000 dance in -30C temperatures in snowsuits) to a burlesque festival (where participants wear somewhat less).

For many of these events, like High Lights, we return eagerly each year.

Take the Blue Metropolis Writers Festival, for example. Sure, many towns host a literary event. But not many feature international luminaries like Colm Toíbín, Derek Wolcott or Carlos Fuentes, all of whom we’ve seen, and its program is culturally diverse: sessions are not only in English and French, but in languages as diverse as Italian, Russian, Creole and Catalan.

That international vibe spills over to the 10-day World Film Festival each August. Helmed by an idiosyncratic but well-connected octogenarian, Serge Losique, the festival is the antithesis of its much more famous Toronto counterpart. Losique’s focus is on obscure films that won’t make it to the Academy Awards. In the last three years, its top prize has gone to features from Poland, Turkey and Belgium.

The festival attracts a raft of celebrities you’ve never heard of, though they may be mobbed back home. Anyone can get to know them better by attending daily news conferences with film crews. You don’t have to be a journalist to attend or ask a question.

Perhaps the two most famous festivals are the annual International Jazz Festival and the comedy event Just for Laughs. 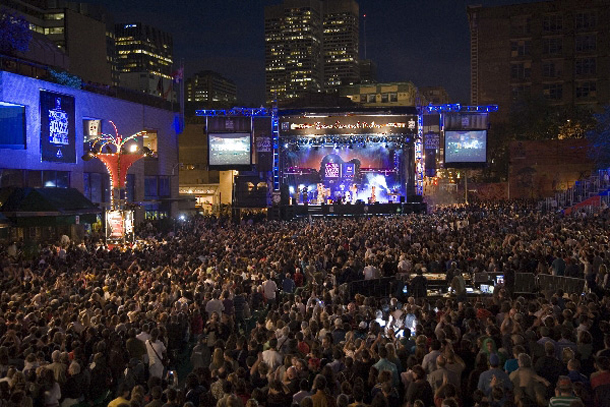 The world’s largest jazz festival (according to the Guinness Book of World Records) launches its 35th year in late June with artists as varied as Diana Ross, Esperanza Spalding, the Glenn Miller and Tommy Dorsey orchestras, and Ben Harper. In all, there’ll be 3,000 musicians from 30 countries. More than half of the 1,000 concerts and other activities will be free.

Just for Laughs follows almost immediately. Like the jazz fest, it’s the largest event of its kind in the world, drawing the top talent in stand-up comedy. Consider some of last year’s lineup: Amy Poehler, Seth Meyers, Joan Rivers, Eddie Izzard and Dave Chappelle, who broke the festival record for number of tickets sold (more than 14,000 over 10 shows).

It draws such performers partly because of its professional workshops and seminars, during which comedians, television executives and promoters meet to hammer out deals, much as is done in venues like the Cannes or Toronto film festivals.

The festivals are successful because they’ve emerged from individual entrepreneurs rather than government planning, says Pierre Bellerose, vice-president of public relations and research for Montreal Tourism. The events were born organically, not by official policy.

But once the pioneering events caught on, the city fostered growth through grants, free support such as policing, and smart urban planning. City hall built a festival plaza – where that Ferris wheel and urban slide were erected – and the city closes down street traffic during festivals to allow pedestrians to roam the area at will.

“Most people at the festival plaza – I’d say 75 to 85 per cent – are locals,” Bellerose adds. “And that’s what tourists want. They want to go to things that are part of the local scene, not just for other tourists.”