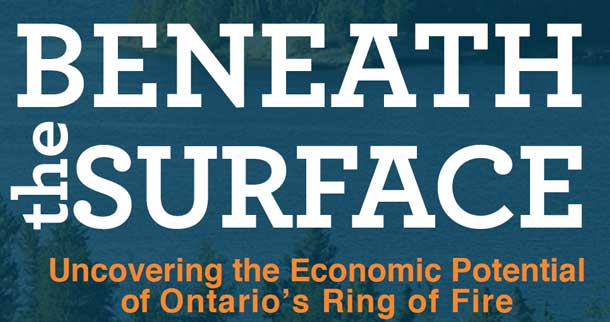 THUNDER BAY – Business – A new report from the Thunder Bay Chamber of Commerce and the Ontario Chamber of Commerce reveals that Ontario’s Ring of Fire, the mineral resource-rich region in the James Bay Lowlands, will generate up to $9.4 billion in new economic activity over the first 10 years of operation and sustain 5,500 jobs annually.

According to the study, Beneath the Surface: Uncovering the Economic Potential of Ontario’s Ring of Fire, the mining development could generate more than $25 billion across numerous sectors in Ontario by 2047, including $2.7 billion in revenues for the financial services sector and $1.2 billion for the wholesale and retail trade sectors.

The report finds, “Despite its far-reaching economic potential, however, the Ring of Fire does not yet resonate in the consciousness of the broader public. A recent survey we conducted in partnership with Leger Marketing shows that businesses in southern Ontario are unaware of the potential benefits from its development”.

“Our study makes it clear that the short-and long-term economic impacts of the Ring of Fire extend far beyond mining,” says Allan O’Dette, President and CEO of the Ontario Chamber of Commerce. “It’s time to broaden the Ring of Fire conversation to include all of Ontario, not just the Far North.”

“We must work to ensure that the resources in the Ring of Fire are fully utilized to create jobs and economic growth in Thunder Bay and across the Northwest,” says Charla Robinson, President of the Thunder Bay Chamber of Commerce.

The Executive Summary states, “Throughout our consultations, this lack of awareness has been cited as a crucial variable slowing the development of the Ring of Fire. With that in mind, two related goals of this report are to provoke an evidence-based discussion across the province and to enhance public awareness of its economic potential.

“We find there is much more work to be done before we can realize the full economic potential of the Ring of Fire: there is a significant infrastructure gap in the region, skilled labour is in short supply, partnerships with Aboriginal communities need to be finalized and implemented, and cutting-edge technologies will need to be deployed to minimize environmental impacts”.

“With appropriate planning and investment, this development can drive the Ontario economy for decades to come.” The study shows that the Ring of Fire will generate significant revenue for governments, to the tune of $1.95 billion within the first 10 years of its development. The authors call on the provincial and federal governments to design and fund a plan to address inadequate transportation infrastructure in the Ring of Fire, which is cited as a significant barrier to the development.

“There is a strong business case for governments to invest in this economic opportunity,” says O’Dette. “The federal government, in particular, needs to play a more active role in this development, as it has for other transformative projects including the oil sands, the St. Lawrence Seaway, and Churchill Falls.”

The Thunder Bay Chamber of Commerce is hosting a luncheon and panel discussion on the report findings on Wednesday, February 26. Full details and registration are available at www.tbchamber.ca/rof/

Additional highlights from study include:

Within the first 10 years of its development, the Ring of Fire will:

Within the first 32 years of its development, the Ring of Fire will generate more than $25 billion in economic activity across numerous sectors in Ontario, of which mining is just one: