Home News International News Kiribati Island – Fiji Has Your Back!

KIRIBATI – International – Rising waters in the Pacific Ocean threaten the island nation of Kiribati. “Fiji will ensure that the people of Kiribati have a home if their country is submerged by the rising sea level as a result of climate change”, said the President of the Republic of Fiji, Ratu Epeli Nailatikau.

The Fijian President made the announcement during his state visit to Kiribati this week, confirming the suggestion made recently by Fiji’s Prime Minister, Voreqe Bainimarama, that Fiji would assist Kiribati in any way it could.

Millennium Island — known as Caroline Island prior to 2000 — is located at the southern end of the Line Islands in the South Pacific Ocean. This uninhabited island is part of the Republic of Kiribati, an island nation comprised of 32 atolls (including Millennium Island) and one raised coral island. Millennium Island is formed from a number of smaller islets built on coral reefs. The coral reefs grew around a now-submerged volcanic peak, leaving a ring of coral around an inner lagoon. 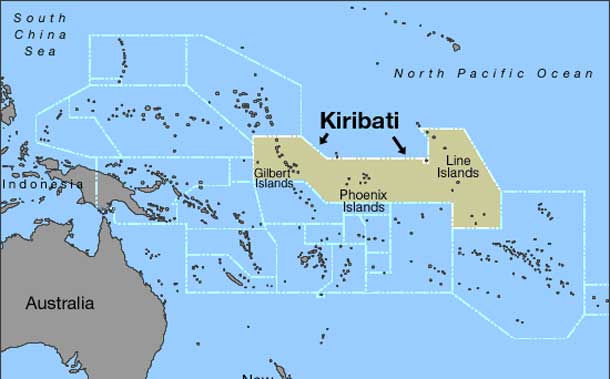 The islands above the waterline are composed primarily of limestone rock and sand derived from the reefs. At a maximum height of approximately 6 meters (19.7 feet) above sea level, Millennium Island has been identified as being at great risk from sea level rise by the United Nations.

If the sea level continues to rise at its current rate, Kiribati, a nation of low lying atolls, faces the likelihood of complete submersion by the end of the century if not sooner, threatening the country’s very existence.

Kiribati has already purchased 6,000 acres of land on Fiji’s second biggest island, Vanua Levu, to ensure its food security as the sea encroaches on its arable land.

Speaking at a state dinner hosted by Kiribati President Anote Tong on Tuesday, the Fijian president announced that some or all of the people of Kiribati would be able to migrate to Fiji with dignity if the need arose.

“Fiji will not turn its back on our neighbours in their hour of need,” he said. “I want to assure you all that Fijiwill stand shoulder to shoulder with you as you face this crisis, as well as in doing everything possible to try to avert it. In a worst case scenario and if all else fails, you will not be refugees.”

Such a migration is not without precedent. Fiji has previously accepted the Banaban people when they were forced to leave Ocean Island – one of Kiribati’s thirty-three islands – because of the pressure of phosphate mining there.

“These people now live in Fiji but have their own seat in the parliament of Kiribati and if necessary, we will do it again,” the president said.

“The spirit of the people of Kiribati will not be extinguished. It will live on somewhere else because a nation isn’t only a physical place. A nation – and the sense of belonging that comes with it – exists in the hearts and the minds of its citizens wherever they may be,” he said.

The president added that Fiji is especially keen to lead and assist the Pacific region’s effort to persuade the rest of the world to finally take decisive action on climate change.

“It is simply not acceptable for the world to stand by and watch the republic of Kiribati – a sovereign nation and a member of the United Nations – sink slowly beneath the waves,” the President said on Tuesday.

He said that Fiji is using every possible means at the United Nations and in its agencies to draw attention to the plight Pacific island nations face and the selfishness of the big carbon polluters in putting their interests above all else.

He added that the issue of climate change matters not just to the people of Kiribati, but to every Pacific Islander.

“For example, in Fiji, we have already had to move one village altogether out of the way of the rising sea, and a second will soon be relocated, and a further 676 communities throughout the nation are threatened in some way” he said.