THUNDER BAY – Civic Politics – I had the pleasure of taking in a luncheon hosted by the Chamber of Commerce that discussed the city’s financial situation. Those in attendance were presented with a report from Lakehead University’s Small Business Consulting Services that outlined our finances and forecast property taxes for the next 4 years. The report used numbers from the city’s financial statements and the BMA Management Consulting Inc. Municipal Study from 2012. The results are very serious and all current Councillors, Candidates and all tax payers NEED to start making adjustments NOW!

Thunder Bay was compared to 8 other cities that are close to our size or are in Northern Ontario and were ranked in 5 categories. Those categories were Socio-economic, financial indicators, revenue vs expenses, tax policies and water/wastewater. Our best score came in financial indicators where we ranked 5th. Other than an 8th place finish in socio-economics, we were last in the other categories. What does that mean? It means our current municipal business model is inefficient and relies heavily on rising taxes. 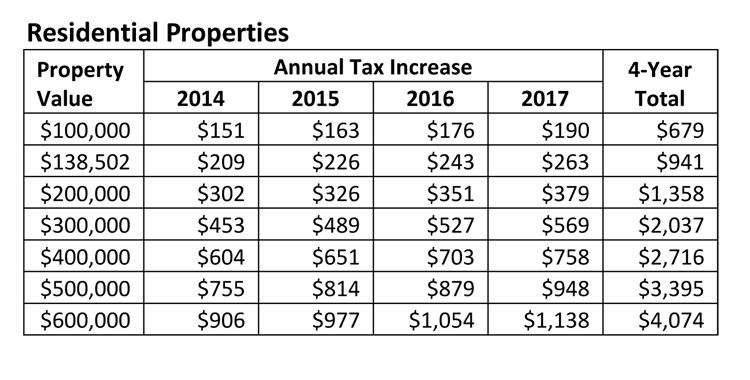 The report went on to say that under the status quo, we can expect even higher taxes over the next 4 years. To the tune of an average of over $200 a year for a house valued at just over 130k. TAX HIKES You’ll see in this graph if you have a home valued at over $500,000, you’ll be paying over $3,000 more property taxes over the next 4 years! This is not a sustainable model and one that is leading us into a corner of massive service cuts, crumbling infrastructure or out migration. It will also lead to massive senior poverty as people on fixed income will not be able to handle these increases.

How can this be fixed? If you ask many on our current council, they will tell you that the study doesn’t take in account new home builds. They’ll say this will offset increases in costs in other areas, but that argument is fundamentally flawed. As we build new homes in new areas, we add new roads, new sewers, new hydro lines and new phone lines. This extends the coverage area of police, fire and all city services. This isn’t free, which means all new developments cost close to what they bring in. The ONLY way we can fix this issue to make better long term decisions. Developing over existing infrastructure will give us meaningful gains in revenue. Creating more competitive tax incentives to create new business will increase revenue. We need bold ideas, and frugal decisions that will maximize our tax dollars.

To that I say DO YOUR JOBS. Council was elected for 4 years not 3! This council will be a “lame duck” 6 months prior to the election and unless my calendar is wrong we still have plenty of time before that.

NetNewsLedger has offered editorial space to all registered Civic Election 2014 candidates to share, with you our readers, their views on issues of the day. We view this as a key means of citizens in the City of Thunder Bay and communities across Northwestern Ontario to find out what the people seeking to be their voices and representatives in civic government are all about.

Each Candidate’s Ledger is published as received by NetNewsLedger from the candidates. NetNewsLedger.com publishes each column based on our Terms and Conditions.

If you are a registered candidate, and wish to participate; Contact NetNewsLedger.

Imagine the Future of the Fort William Gardens – Shelby Ch’ng