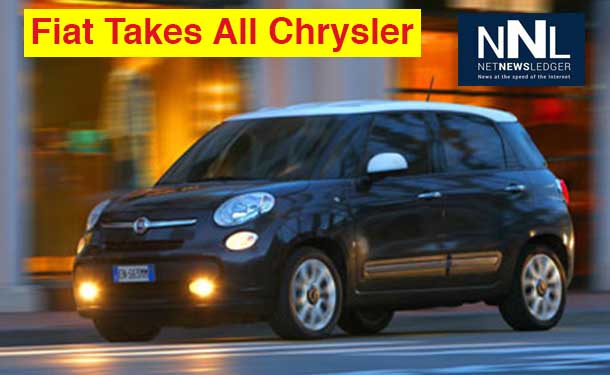 Fiat Chair Marchionne – One for the history books

AUBURN HILLS, Mich. – Business – Fiat is taking full ownership of American Auto Giant Chrysler. The price of stock in Fiat, the Italian car giant have increased by more than 15 per cent. The jump in the share price comes after the announcement by the company to purchase the remaining 41% of American auto giant Chrysler.

Fiat has been the majority owner of Chrysler since 2009.

The move creates the seventh-largest car company in the world.

In consideration for the sale of its membership interests in Chrysler Group, the VEBA Trust will receive aggregate consideration of U.S.$3,650 million consisting of:

Contemporaneously with the transactions described above, Chrysler Group and the International Union, United Automobile, Aerospace and Agricultural Implement Workers of America (the “UAW”) have agreed to a memorandum of understanding under Chrysler Group’s existing collective bargaining agreements to provide for additional contributions by Chrysler Group to the VEBA Trust of an aggregate of U.S.$700 million in four equal annual installments. The initial payment will be made on closing of the transaction with Fiat and additional payments will be payable on each of the next three anniversaries of the initial payment. Chrysler Group expects to fund the initial contribution to the VEBA Trust from available cash on hand.
Chrysler and Fiat will pay the Veba trust an initial $3.65bn.

Once the deal is signed off, Chrysler will pay Fiat another $700m.

Fiat chief executive, Sergio Marchionne, said the plan is to broaden Fiat’s global reach. Marchionne says that the deal is one of his life’s “defining moments that go down in the history books”.