THUNDER BAY – Thunder Bay Police, Fire and EMS responded to a report of an adult female with serious injuries at approximately 03:38EDT outside of a Lake Street residence.

The female was transported to hospital and was pronounced deceased.

This is the second homicide in Thunder Bay this year. Travis Beardy Cutfeet was the first murder victim in Thunder Bay in 2013. Cutfeet was stabbed in what apparently was a drug deal gone bad. That murder, a stabbing happened on May Street. 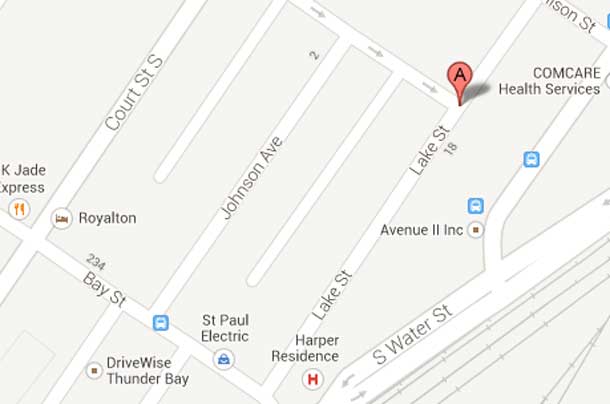 The Criminal Investigations Branch is on scene this morning conducting the investigation.  This death is being investigated as a homicide.  Identification of the female victim is pending a post mortem examination, which is still to be scheduled.

Details will be updated on this developing story…

In other police news, The Thunder Bay Police were called to investigate an incident that occurred at the County Fair splash pad located on County Boulevard in the early evening of July 14th, 2013.

TBPS state, “Officers spoke to the complainant who reported that his sons and their friends aged 8 to 11 years old were at the splash pad when they observed two teen aged females take two back pack that belonged to some the boys Two of the boys pursued the girls who stopped and threatened to assault them”.

The boys ran home and alerted their parents. The complainant jumped on his bicycle and located the girls in the area and was able to get the backpacks without incident.

Police were called and the girls were located in the bike path area behind the Landmark Inn a short time later.

Two 16-year-old females were arrested and escorted to the Balmoral Police Station. They have both been charged with Robbery. One of the females was found breaching terms of her Probation and was charged accordingly. Both were remanded into custody during their court appearance earlier today.