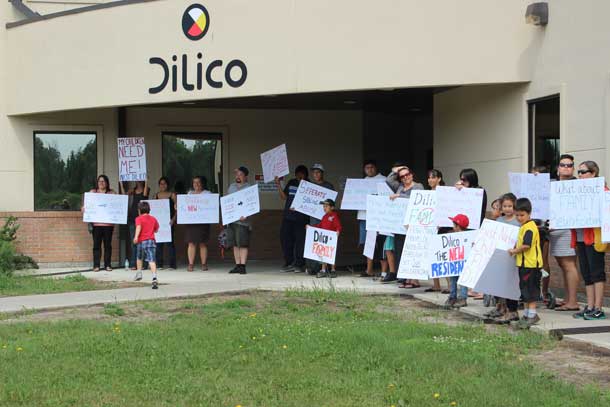 THUNDER BAY – Parents of children impacted by the Dilico strike met with management of the child care agency Friday. A peaceful protest was planned at the agency located on the Fort William First Nation. The families are concerned that their visitation rights with their children currently in care have been broken during the labour dispute.

Families are worried that the agency which they often see as making decisions that impact them without enough consultation are seeing the situation worse now with the workers on the picket lines. While some of the parents say that they were ‘booed’ by care workers, overall the atmosphere was of respect, and of friendship.

Issues facing families during the labour dispute are restricted visits to see their children.

Also of concern is that many of the parents seem to struggle from not having enough time with their individual case workers to make the progress that is required for them to get their children back into their care. One of the parents explained how there were 350 children in care ten years ago and how today that number is almost 900 children.

The problems according to parents is that the agency in their view needs to be doing more to re-unite families. Tannis Smith, a child care worker and advocated shared with NNL how one of her cases has a mother who this August will not have seen her children for two years.

One mother shared how she had completed all the treatment she was asked to complete. She had a baby who was stillborn, and there was not enough support in her view, and she fell into a depression and started drinking. Her view is simply that if Dilico had returned her children, that she would never have become depressed and started drinking.

The keys seem to be greater communications, and more time for caseworkers.

Families are concerned that Dilico has too many managers, and not enough case workers. Dilico is not willing to engage is discussion during the labour dispute about numbers. The annual report released by the agency in 2012 shows that 843 children were in care at some point during the year. The agency started with 516 children in care and finished the year with 590 children in care.

The CEP workers manning the picket line are echoing some of the exact same issues as families, and as Dilico management are talking about. It appears even though there are no talks scheduled, that the reality is getting everyone back to the table would solve the strike issue sooner, rather than later.