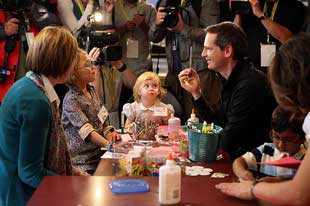 He was first elected as a Member of Provincial Parliament in 1990, filling the seat held by his father, Dalton McGuinty Sr., and there is no doubt he inherited a fierce devotion to public service that he shares with each member of his close-knit family.

As Ontario’s 24th Premier, he reminded us that government could build us up through investments in education, health care, research and innovation.

He created Ontario’s Greenbelt, committed to phasing out coal-generated power and began to address the provincial infrastructure deficit through the introduction of MoveOntario.

He steered this province through a global recession and three general elections. Unbowed by the challenges of his office, he always had a family anecdote, a historical reference and a charming turn-of-phrase to put things in perspective.

Dalton has been an unwavering political force since I first entered provincial politics, and I thank him, Terri and their children for the sacrifices they have made. I wish him well in the next phase of his impressive career.