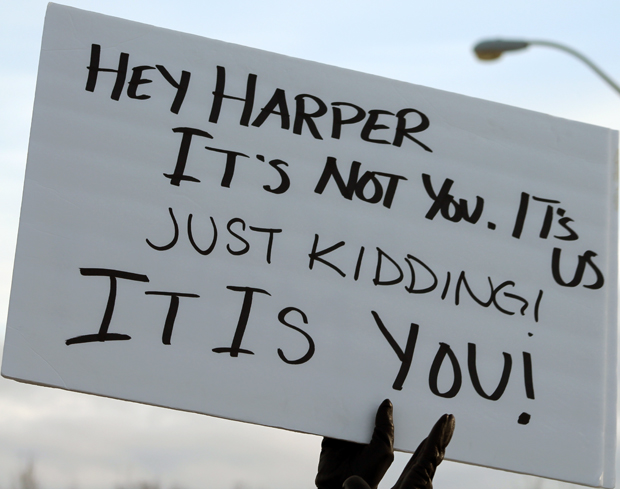 THUNDER BAY – The Conservatives rode to power on a platform that they would run an honest and more open government. Following the Sponsorship Scandal, the Liberals were painted as tainted. The Senate Scandal impact on the Conservative brand is seemingly gaining momentum.

The Ipso Reid Poll finds that “Canadians want the Senate-expenses investigation to be handled outside of Parliament and in the hands of the RCMP (44%) or a public inquiry led by a judge (31%).

The problem for the Conservatives is that by painting the Liberals as corrupt, and themselves as changing how Canada is governed, the scandal hits hard at their constituency base, and boxes the party.

In the video, Conservative John Baird expressed how replacing accountability will be a priority.

“In fact, few (6%) believe the issue should be left to the Senate to investigate, and only one in ten (12%) believe the House of Commons Ethics Committee should lead the investigation (12%). One in ten (8%) Canadians believe that we should ‘drop the whole issue and move on without any further investigation because it is not really a big deal’.”

At the request of the Senate of Canada, the external auditing firm Deloitte has audited a number of Senator’s expense reports and has said there are problems with some claims relating to housing allowances and travel expenses. In one case, Senator Mike Duffy repaid $90,000 in expenses by way of a monetary gift he receive from the now former Chief of Staff to the Prime Minister, Nigel Wright. Questions surrounding the appropriateness of the gift have resulted in Senator Duffy resigning from the Conservative caucus and Nigel Wright resigning as Chief of Staff. The Prime Minister has stated that he had no knowledge of Mr. Wright’s actions.

The Prime Minister, well known to be a very hands on and controlling manager, is not generating a great deal of trust over his handling of the issue.

The question arises as to what should be done with Senators should they be found to have been in violation of Senate expense policy. One quarter (23%) of Canadians more closely believes that ‘it’s possible that they made clerical mistakes and that they should be able to pay back the expenses that they shouldn’t have claimed, and stay as a Senator’. Conversely, most (77%) Canadians are of the opinion that ‘regardless of their personal excuses, if there has been a violation of living allowance expenses, they should have known better and, if found to be in breach, should resign from the Senate’.

What Now for The Senate… 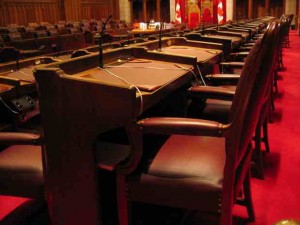 The recent scandal has not helped the Senate in its ongoing public-relations battle for relevancy and support among the Canadian population. Four in ten (43%) believe the Senate should ‘be done away with completely’, which is up 7 points from a similar poll conducted in February of 2013. A similar proportion (45%) would prefer that ‘it be reformed to make it, for example, an elected body’, up 3 points. Just one in ten (13%) Canadians believes that the Senate should ‘be kept as is’, which is down a significant 9 points in the last three months.

Wholesale reform, however, is unlikely to come quickly. In the meantime, nine in ten (92%) Canadians ‘support’ (69% strongly/23% somewhat) the idea of requiring Senators to post all of their expense reports online, along with receipts’, while just one in ten (8%) ‘oppose’ (2% strongly/6% somewhat) this idea. There are similar levels of support (92% — 68% strongly/24% somewhat) for requiring Members of Parliament to post all of their expense reports and receipts online for public scrutiny, while few (8%) oppose (2% strongly/6% somewhat).

With three out of four Senators whose expenses are currently being investigated being Conservatives at the outset of the investigation (some of whom have since resigned from caucus), along with the apparent involvement of the Prime Minister’s office, it appears that the entire situation has not helped the Conservative Party to stem the momentum of the Liberals.

If an election were held tomorrow, 36% of decided voters would vote for the Liberal Party under Justin Trudeau (up 1 point since last month), while 30% would vote for the Conservative Party, led by Prime Minister Harper (down 2 points). The NDP, led by Thomas Mulcair, has rebounded to 27% support (up 2 points). The Bloc would garner 4% of the vote nationally (down 1 point) while some other party, including Elizabeth May’s Green Party, would receive 4% of the vote (up 1 point).

Although it is likely two more years until the next federal election, what is troubling for the Prime Minister is that just 31% of Canadians now believe that ‘the Harper Government has done a good job and deserves re-election’. In December of 2010, prior to the Federal Election in the spring of 2011, 42% thought the Prime Minister deserved re-election, a difference of 11 points. Conversely, seven in ten (69%) Canadians are now closer to the opinion that it is ‘time for another federal party to take over’, while, prior to the last election only 58% thought so.

Likely explaining the drop in support for Stephen Harper and the Conservative party is the fact that he is behind on various leadership attributes.