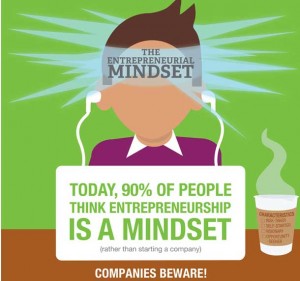 Often overlooked by many are the efforts of small companies, owned by individual entrepreneurs who run their businesses from home or from a small office.

The Future of Work is Changing

oDesk®, the world’s largest online workplace, and Millennial Branding, a Gen Y consulting firm, have announced results of a new study, “Millennials and the Future of Work.” The survey, conducted by independent research firm Genesis Research Associates, examines perspectives on the future of work from 3,193 freelancers worldwide, including 1,958 Millennials (19 – 30 years old). Findings reveal a desire to follow independent career paths due to the freedom and flexibility professionals say these paths provide, as well as a groundbreaking redefinition of what it means to be ‘an entrepreneur’. 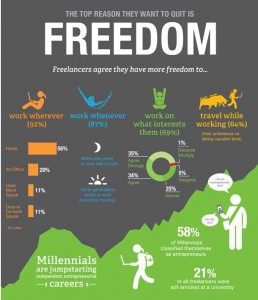 Of the freelancing Millennials surveyed, 58% of those familiar with the term “entrepreneur” classified themselves as one. Among all generations, freedom to work how they want is critical — 89% said they’d prefer to work when and where they choose (versus in a corporate, 9 – 5 job). In fact, among those surveyed who were still at “regular” jobs, freedom was the top reason they wanted to quit. When comparing freelance work to “regular” jobs, freelancing was seen as providing more freedom to:

Karen Queller, a 24-year-old Millennial who is working online while traveling the world, is quick to urge others to follow a similar path: “I want my life to inspire other people to live how they want. People have a lot of fears that hold them back from doing what they really want and I think many people would love to travel and work at the same time.”

“We believe that the barriers of Industrial Age work simply don’t make sense for businesses that want to get more work done, or for workers who are demanding more freedom. No one today wants to be confined to a cubicle,” said Gary Swart, CEO of oDesk. “As independent professionals embrace this freedom, hours worked on oDesk have increased eightfold since 2009.”

Freelancers’ intent to follow through on the desire to quit and work only for themselves is high; 61% say they are likely to quit their “regular” job within two years (44% “probably will” and 17% “definitely will”).

“This signals a major shift in our economy and how we manage our careers,” said Dan Schawbel, founder of Millennial Branding and author of Promote Yourself. “Entrepreneurship is now accessible to everyone regardless of age or occupation. You don’t need to own a business to be an entrepreneur, but you do need the entrepreneurial mindset to be successful in business.”

Entrepreneurship is something to aspire to, especially for Millennials
While entrepreneurship can be challenging (47% of those familiar with the term “entrepreneur” felt “there are downsides” while 53% indicated it is “an entirely good thing”), Millennials are more likely to see it as “entirely good” (57%, compared to 47% of those from older generations). However, the benefits of being an entrepreneur outweigh the downsides (75% of all surveyed agreed). In fact, 38% would even recommend pursuing a “promising start-up opportunity” versus completing a “traditional college degree.”

Gen X is seen as leading the future, but 2/3rds of Millennials already think their generation is ready to take the driver’s seat
Respondents of all generations surveyed said Generation X (31 – 48 year olds) is most likely to be best-suited to run today’s businesses, and therefore to lead the future of work. However, two thirds of Millennials already say that their own generation is best-suited (versus only 31% of those from other generations who say that Millennials are best-suited). This more grandiose view of their own generation’s abilities is in keeping with well known studies on current Millennial attitudes by Dr. Jean Twenge, who found that “narcissism is markedly higher among college students in the 2000s compared to those in the 1980s.”