OTTAWA -This is Hannibal is about to go live!  www.rfvideonow.com is proud to announce it’s first Live IPPV Shoot interview with special guest “Hannibal” Devon Nicholson.

This is Hannibal – DVD now released

The IPPV will air live on March 10th at 8:00pm and you can pre-order on the website http://www.rfvideonow.com/live.html.

Former WWE Super star, the original Super star, “Super Star” Billy Graham will be calling in as a special guest.

Make sure you check this IPPV out as Nicholson will be talking about The Abdullah The Butcher lawsuit; The WWE situation; Kurt Angle; Chris Jericho; and Jacques Rougeau just to name a few. 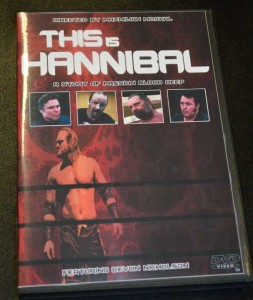 From the trailer, you can certainly see that Hannibal is still alive, well and ready to burst.

Devon is, at least in my opinion, when he is Hannibal one of the most believable, intimidating, and scary people I have ever met.

Hannibal is off the wall, unpredictable, and wild.

In Thunder Bay when he took on wrestling legend Terry Funk at a pre-event press conference at the Prince Arthur Hotel, the entire audience was completely taken aback. So too was the staff at the long-time Thunder Bay iconic hotel.

For his two events in Thunder Bay, as Ring Announcer, when Hannibal headed to the ring, I never knew what would happen. What did was some of the most solid, hard-hitting exciting wrestling fight action ever!

You can also check out the documentary ‘This is Hannibal” on www.rfvideo.com.

The documentary follows the last 6 years of Nicholson’s life and goes into great detail on his dream/journey of becoming a WWE wrestler.

Nicholson has been updating Netnewsledger readers on his ongoing treatment to cure himself of Hepatitis C.

Devon also presented two excellent wrestling shows in Thunder Bay featuring many Super Stars of Wrestling along with many up and coming stars.