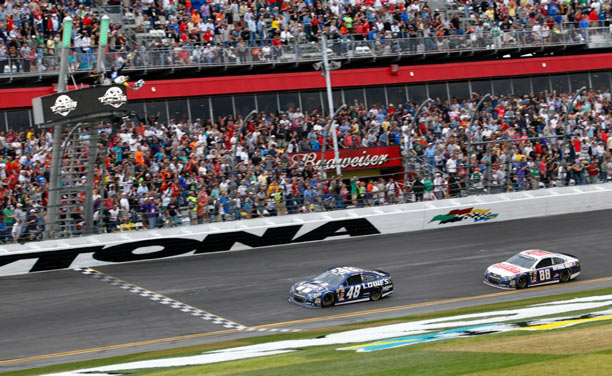 DAYTONA, Fla. – Five-time series champion Jimmie Johnson, driver of the No. 48 Lowe’s Chevrolet SS, won the 55th running of the Daytona 500 at Daytona International Speedway on Sunday. It also marked the first victory for the recently introduced Chevrolet SS, which made its NASCAR Sprint Cup Series debut.

“I’m very happy to win the first Gen-6 race in the Gen-6 car for Chevrolet in their SS,” said Johnson, who led 16 laps and took the lead for good shortly after the final restart. “Awesome day.”

“Congratulations to Jimmie Johnson, (crew chief) Chad Knaus and (team owner) Rick Hendrick on their victory in The Great American Race,” said Jim Campbell, Chevrolet vice president of Performance Vehicles and Motorsports. “And for the Chevrolet SS to win its first points race is incredible. This is a culmination of a tremendous effort by our engineers, owners, drivers, crew chiefs and teams who worked together to develop the Chevrolet SS race car. So much hard work went into preparing the Chevrolet SS for competition in the Sprint Cup series. We waited a long time for this race, and the performance of the No. 48 team made that wait worthwhile.”

It was the seventh Daytona 500 victory for Hendrick.

Chevrolet now has 22 Daytona 500 victories, more than any other manufacturer. A Team Chevy driver has won seven of the last 11 NASCAR Sprint Cup Series openers at the 2.5-mile track.