Collectively, 76 percent of survey mining executives currently have international mining operations, with an additional 5 percent planning to expand internationally in the next six to twelve months. Those surveyed cite Africa (32 percent) as their primary target for expansion, followed by North America (23 percent) and Latin America (17 percent). Interestingly, each country notes some domestic expansion activity, yet motivations for international development differ between countries.

For instance, South African companies are exclusively looking to expand further into Africa in 2013, while Canadian companies (56 percent) anticipate that North America will be a key component of expansion plans – suggesting that an expansive geographic footprint is a challenge for mining companies. One-third (33 percent) of all executives from the U.S. are eyeing Latin America for future development, almost double the study average of 17 percent.

“A company’s ability to expand internationally will be a competitive advantage as resources become more challenging to mine around the globe,” says Charles Dewhurst, Global National Resources Leader, Natural Resources industry group at BDO. “Yet expansion without properly managing the financial risk and exposure can seriously impact a company’s success”.

[sws_pullquote_right]“As mining companies ride the ebb and flow of commodity prices, they should remain aware that other risks, including the high cost of infrastructure, geopolitical unrest and regulatory issues, challenge the profitability and long-term sustainability of their operations.” [/sws_pullquote_right]

“As countries around the globe consider new tax regulations and royalty requirements, it is critical they weigh the risk and reward of expanding operations.”

International mining executives are employing a variety of tactics to enter foreign markets, including joint ventures with local companies (39 percent), acquisitions in the country of interest (31 percent) and independently establishing operations (24 percent). While their strategies for entry into a foreign market differ, there are some commonalities. For example: South Africa (36 percent), the U.S. (50 percent) and Australia (48 percent) prefer joint partnerships, while Canada (40 percent) and the U.K. (44 percent) favor acquiring a company in their target region. 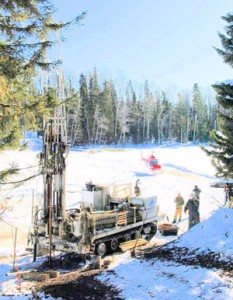 “While most commodity prices continue to be near record levels, macroeconomic issues around the globe continue to impact the mining community at large,” says  Dewhurst. “As mining companies ride the ebb and flow of commodity prices, they should remain aware that other risks, including the high cost of infrastructure, geopolitical unrest and regulatory issues, challenge the profitability and long-term sustainability of their operations.”

The BDO state, “To grow their organizations, 40 percent of executives plan to expand their business through further international expansion, followed by domestic expansion (27 percent) and merger and acquisition activity (23 percent). With limited resources on their shores, the U.K. has the largest focus on international expansion, with 71 percent looking overseas. The U.S. deviates from the collective trend, with 25 percent citing research and development as a preferred means to grow their organization compared to an average of only 10 percent across all countries”.

The mining sector in Ontario has huge potential. There are also serious issues that are on the horizon for mining in Northwestern Ontario. Environmental concerns, The Far North Act, Aboriginal engagement, and economic agreements are all required.

While there is enormous excitement over the Ring of Fire and the chromite potential, it is important to keep in mind that the project is still only at the feasability study stage right now.

The federal Conservatives have put FedNor Minister Tony Clement in charge of the ‘Ring of Fire’. On February 20th in Thunder Bay Clement Tweeted, “An early start in Thunder Bay. The sun isn’t out yet, but more Ring of Fire meetings are about to start”.

Minister Clement states, “The Ring of Fire is potentially the biggest mining development Northern Ontario has ever seen. And that is saying something.

“Its chromite deposits represent the single, largest, stable source of the metal in North America. The Ring of Fire has the potential to create over 5,000 direct and indirect jobs in Northern Ontario alone, plus significant spin-off benefits throughout the province”.

The potential is massive.

In a statement, Cliffs Natural Resources state, “Before Cliffs can make a final decision on the project in its entirety, the Company must receive provincial and federal environmental assessment approvals, negotiate mutually acceptable agreements with affected First Nations communities, work with governments to address the lack of infrastructure in the Ring of Fire and complete its commercial and technical feasibility studies”.

“We will continue our work to meet all of the requirements of the environmental assessment process as well as the expectations of the First Nations and local communities, especially with regards to the social, environmental, and economic performance of this project should it proceed,” said Bill Boor.

Boor added, “We are very excited about the potential impact of this project for all of Northern Ontario. Assuming it goes ahead, our project has sufficient scale to justify infrastructure investments with the potential to connect remote communities with more populous municipalities, opening up the Ring of Fire to other responsible mining investments.”

It will take a co-ordinated effort to make sure our region benefits from all the potential.

“These mining developments have the potential to be the economic engine for the ENTIRE Province for decades to come,” says Mayor David Canfield, Executive Vice President of the Northwestern Ontario Municipal Association.  “It is NOMA’s position that the Government of Ontario, not private corporations, should take the lead in determining the infrastructure requirements of the Ring of Fire and the adjacent communities, securing the route for any proposed infrastructure corridors and coordinating the construction of that infrastructure.”

The theme of the conference is “Building Training, Employment and Development Opportunities For The Future”.

The presentations and exhibits will focus on informing the attendees of job requirements and job opportunities for employment within the mining sector.

There is currently a lack of skilled labour and resources that the mining industry will require over the next few years.

This conference will unite band members, students and the general public with mining industry leaders, training organizations, and mining related companies. Topics will revolve around the status of mining in Northwestern Ontario, academic requirements for various careers and trades, careers for women in mining, aboriginal mining involvement and resources available for employers and prospective employees.