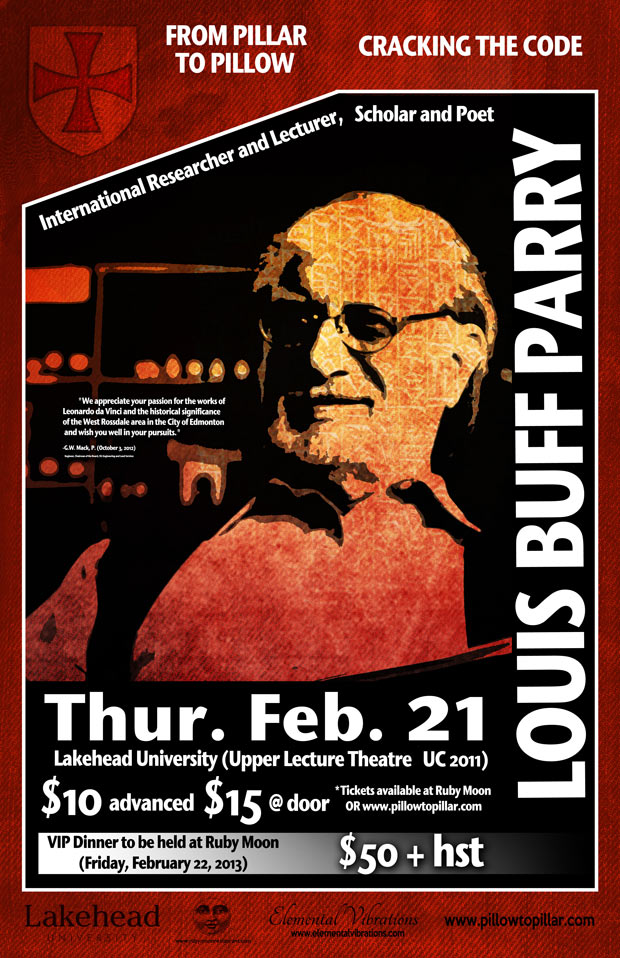 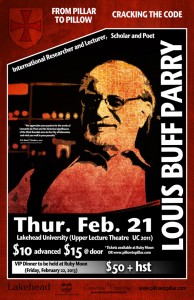 Louis Buff Parry, a professional codebreaker, has filmed a documentary claiming to show that the Holy Grail is actually buried in Shugborough. A marble tablet built in the town in 1748 has for a long time been reputed to point the way to the burial of the Grail, but codebreaker Parry arrived in Shugborough bearing a mass of evidence which he says proves that the holy relic is actually buried there. The film received its premiere in Hollywood on 12 May, and it is possible that the UK premiere may be held in Shugborough.”

The evening’s lecture and discussion following will have some regional implications according to event organizer Lori Paras.

Here is some confirmation of Cree leaders commenting on the Cree Prophecy Stone (the same La Verendrye pulled from the pillar on Milk River January 1, 1743), as early as 1984 and on record. Del Anaquod, when he was the President of what was then called the Saskatchewan Indian Federated College in Regina, was published stating in an interview that appeared in the Regina Leader Post on March 17, 1984, with regard to this stone, that “Buff has done a lot of research … many scientists are merely replicating proven theories and experiments. We are planning to have a conference on the facts and ideas that upset this accumulation … Buff’s theory is one such anomaly.”

Professor Blair Stonechild and President Del Anaquod reported they had personally found two of the topographical sites La Verendrye reported traversing as he led up to the sandstone pillar in which our stone awaited. Those are two of the sites that are also indicated on the La Verendrye trail map Carleton University Geography Department cartographers created, in honour of my quest, in the middle 1980s.

They are the footprints and handprints carved in stone at Saint Victor Petroglyphs just south of Regina, and the stones leaning on stones at the Cypress Hills that straddling the south border of Saskatchewan and Alberta. After Douglas Cardinal designed the new SIFC building, the College was renamed the First Nations University of Canada, and it was in both the old and new facilities where the pursuit of further information about this stone continued.

Twenty years after Del’s interview was published, the Elders at both the Long Island Cree Nation of Saskatchewan and Pimicikamak (Cross Lake) Cree Nation of Manitoba Gatherings of 2003 and 2004, where Cree assembled from the entire extended Cree diaspora met, unanimously agreed that I located their lost Cree Prophecy Stone.