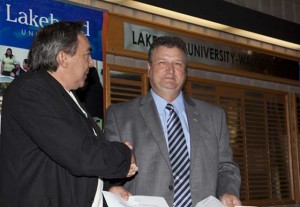 The presidents of Lakehead University (Brian Stevenson) and Laurentian University (Dominic Giroux) will serve as voting ex-officio members of the board.

The board will convene its first meeting at Algoma University in Sault Ste. Marie on February 20th, wherein members will elect a chair and vice-chair. The board will immediately begin recruitment of NPI’s founding executive director.

The creation of NPI – an independent, not-for-profit organization based at Laurentian University in Sudbury and at Lakehead University in Thunder Bay – was announced by the Ontario government on August 31st, 2012 and supported by an initial $5 million investment. The purpose of NPI is to develop and promote proactive, evidence-based and purpose-driven policy options that deepen understanding about the unique challenges and opportunities of Northern Ontario in addition to advancing the sustainable development and long-term economic prosperity of the North.

The inaugural NPI board of directors’ selection process was based on a skills matrix that considered experience relevant to NPI’s purpose, background, geography and interests. Board members were chosen from approximately 70 nominations and expressions of interest in response to advertisements throughout the North in the fall of 2012.