THUNDER BAY – Business – TELUS has announced an expansion of wireless technology in Thunder Bay. The marketplace now offers Tbaytel, Bell, Virgin, Koodo and TELUS all competing for the wireless customers. The choices in the marketplace are widening.

TELUS announced this week, that the company is “offering the world’s most advanced and fastest wireless technology to customers in Thunder Bay. Additional communities will get access to 4G Long Term Evolution (LTE) in the coming months, as TELUS continues to bring the technology to even more Ontarians in 2013”.

The arrival in the marketplace in 2012 of Virgin and Bell for 4G LTE comes as Tbaytel has invested heavily in building its infrastructure.

Bell and Virgin started operations in Thunder Bay in October. Bell states, “Bell is just starting our expansion into Northwestern Ontario, offering coverage that is part of what is already Canada’s largest, blazing-fast, 4G coast-to-coast network. We plan to continue to build out the network in Northwestern Ontario over the next few years.”

By the end of 2013, TELUS’ 4G LTE network is expected to launch in Ontario regions including Collingwood, Port Colborne, North Bay, Cornwall and Woodstock.

“TELUS is committed to offering the best experience for our customers and the launch of our 4G LTE service in Thunder Bay is an excellent example of how we’re delivering on this promise.” said Hilen Wong, TELUS director of national retail. “With a 4G LTE device like the Samsung Galaxy S III, Note II and soon the BlackBerry 10, our customers right here in Thunder Bay will have the fastest wireless Internet at their fingertips, as fast as your home Internet connection but on your smartphone, tablet or Internet key. We continue to expand this new technology, community by community, so that by the end of the year more Ontario residents than ever will have access.”

To celebrate the launch of TELUS’ 4G LTE network in Thunder Bay, new and existing customers can purchase a $50 rate plan free of premium charges, which includes unlimited Canada-wide calling, voicemail, caller ID and 6GB of data from now until February 7, 2013

What is 4G LTE

The Apple Iphone 4G is not actually a 4g LTE device, and issue that has confused some people.

TELUS’ 4G LTE network supports manufacturers’ rated peak download speeds of up to 75 megabits per second (Mbps), with an expected average of 12 to 25 Mbps. TELUS customers will experience dramatically faster downloads when surfing the web, reading emails or getting the latest chart topping music when using TELUS’ 4G LTE services. Downloading a 600 megabyte album of songs with a 4G LTE-capable device will take just 3.5 to 7 minutes and a 1.2GB HD movie from iTunes will take between 7 and 14 minutes. Importantly, if TELUS customers travel outside of 4G LTE network coverage areas, they will move seamlessly from 4G LTE to the existing 4G HSPA network with no disruption of service.

4G LTE is the latest evolution in TELUS’ wireless network technology plan made possible by the 2009 launch of its coast-to-coast 4G HSPA wireless network service. Today this network reaches more than 97 per cent of Canadians. Since 2000, TELUS has invested more than $30 billion to bring Canadians some of the most advanced wireless networks in the world.

Tbaytel’s 4G HSPA+ network opens mobility subscribers up to the world with additional offerings such as world-wide roaming, content, picture messaging and access to other Smartphone devices such as Androids and iPhones. Tbaytel’s new network is the latest in next generation wireless technology. 4G HSPA+ networks are the most widely deployed mobile broadband voice and data technology in the world today.

Bell states, “LTE is the gold standard for wireless technology. Everything you do using a Bell LTE mobile device on the Bell LTE network, from watching videos to running business applications, will be faster and better. The 4G LTE network currently provides speeds of 75 Mbps in some areas and 150 Mbps in others. 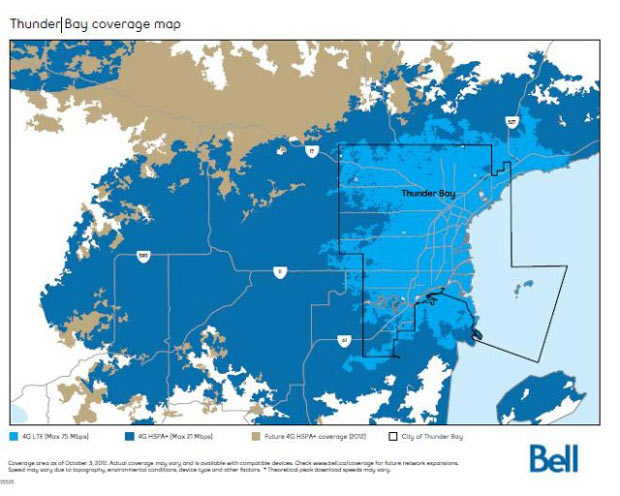