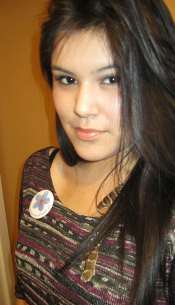 THUNDER BAY – The winner of the 2012 Dr. Graham Chance Award is Chelsea Jane Edwards, who is also the youngest person to ever receive the honour. Edwards is a young lady from Attawapiskat, she is Cree, and she is working to make the world a better place. Her start on this path started with her best friend Shannen Koostachin and the fight for a school for the young people in Attawapiskat.

Chelsea shares, “I want to share with you where it all began before the campaign. In the late 1960s, approximately 50,000 litres of diesel fuel contaminated the grounds of J.R. Nakogee elementary school on my reserve. It wasn’t until the year 2000 that parents realized that their children were suffering because of illnesses caused by the toxic fumes. This was 40 years later and the spill was still not cleaned up.  In 2000, the former Minister of Aboriginal Affairs placed us in what they call “temporary” portables that were placed a couple feet beside the toxic brownfield.  Those ‘temporary’ make-shift portables still exists till this day, that is 13 years later.  I want you to imagine going to school on a daily basis and having to see mice running around your lunch room which also happens to be right beside the washroom which is also where all your classes are”.

From the desire to make things better for the youth in her community, Chelsea has taken that message world-wide. Her journey has not been without pitfalls and setbacks, Shannen was killed in a car accident in 2010, and that tragedy thrust Chelsea into the forefront of the fight.

This outspoken and yet shy young woman has taken the word from the small community of Attawapiskat all the way to Geneva Switzerland where she spoke to the United Nations. She has taken the message to the government of Canada, and through the media around the world.

At the United Nations in Geneva she implored the delegates to question the Canadian Government.

“I want you to ask the Canadian government why First Nations children are suffering in one of the most richest countries in the world? Why are we being treated like second-class citizens as if we were living in a third-world country? The United Nations Convention on the Rights of a Child has a strong principle for non-discrimination however my people are still strongly being discriminated against.

“On a personal level based on my experience, I want to know why a child’s life is cut short just by getting their proper education? I also want to know why First Nations children are facing various issues that range from child welfare, health care, youth justice and suicide”.

Personal reward is not atop this young woman’s list of goals. She is working hard as a high school student, studying hundreds of miles away from her home and her family. She aspired to study law and be an advocate for a better world for not only her people, but for young people across Canada.

Former Attawapiskat Chief Theresa Hall shares, “Chelsea is the ideal youth to take the torch for the Shannen’s dream as she is a role model herself and left her home community to pursue her educational dreams. I am very proud of her”.

Edwards is planning to study law, and is focused on her education and on making a difference in the world.