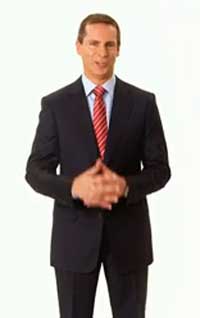 THUNDER BAY – Editorial – Premier Dalton McGuinty was in Thunder Bay on Thursday. Even though the Premier is a nice enough person, and even though he shares interesting stories, perhaps the reality is that until the Premier starts doing more listening and less talking on issues key to our region, his trips north are little more than photo-ops.

Remember when, in September 2007 Premier McGuinty, surrounded by his two local MPPs Bill Mauro and Michael Gravelle, declared how Ontario would be the world leader in developing and manufacturing hydrogen powered rail? That is likely the last time that anyone has ever heard the word hydrogen escape the Premier’s lips.

The opportunity to host an international hydrail conference in Thunder Bay couldn’t even garner the interest of our local Liberals. It was a classic Dalton moment, big promise, little action.

During the last election campaign, when NOMA hosted a Northern Leader’s Debate, the Premier couldn’t be bothered to show up.

During the discussion on the Far North Act, Premier Dalton McGuinty promised Nishnawbe Aski Grand Chief Beardy that the proposed legislation would not pass without NAN’s consent. NAN opposed the legislation and the McGuinty Government rammed it through.

That piece of legislation, opposed by the Thunder Bay Chamber of Commerce, Northwestern Ontario Municipal Association, almost every northern community in the region was fired through by the Premier.

Simply put, welcoming Dalton McGuinty to our city isn’t something all that high on the list of priorities.

When the Premier was in Thunder Bay yesterday, he promised he would listen to proposals from the city toward a new multiplex. Listening isn’t acting, it is what all politicians will say.

The Premier ducked the tougher questions on shortages of doctors, and really didn’t offer much toward solving issues with oxycotene addiction in our region.

Perhaps the reality is most people in our region, while happy with our two hard-working MPPs, need to be helping send the message to the Premier that in marking his Northern Report Card, he is failing this region.

It is likely going to be Northwestern Ontario’s vast mineral wealth, not Dalton McGuinty’s promise of a green energy bounty that returns Ontario to one of Canada’s leading provinces.

Coming north to promise to listen is something no one in our community should be accepting from the Premier.

We have had plan after plan produced, now is the time for real action.

There was little evidence of action in the Premier’s agenda yesterday, so why anyone would be cheering is beyond me.