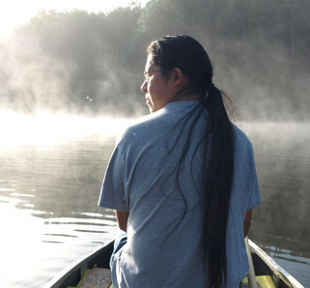 We are all looking forward to a new year but many are fearful of the coming of 2012. Some believe that the upcoming year is marking the end of an historic period. Many think that this year will be a spiritually changing one and far too many believe it will mark the end of the world. This idea has been boosted in popular culture through movies, books and websites detailing how and why this year will mark the end.

The apocalypse was a recurring topic of excitement when I was a growing up in a remote Native community on the James Bay coast. It seemed like whenever a significant date or the announcements of a mystic or religious leader was heard, everyone talked about an end date. When news spread of the end, everyone lived at a more frenzied pace and more people attended the local church. Those end time believer’s plans were tossed to the wind. What was the use of thinking about the future if the end was coming? There was a general sense of fear and apprehension for the future. I have lived through countless apocalypses at this point. I grew so tired of them by the time I was a teenager that I started wishing for an apocalypse for the apocalypse.

When it comes to the upcoming year 2012, most people cite the Mayan long count calendar, a number of years calculated to be a 5,125 year period, according to the Mayan system. This time period actually ends on December 21, 2012 in our modern calendar and it is this date that is falsely explained as the moment when our world will end.

When Europeans first read about Mayan culture and writing, they did so with a Euro perspective. One of the strongest of European ideas were based on Christianity and the image of an end of the world and a catastrophic apocalypse. It was with this frame of mind that a German scholar named Ernst Forstemann, in the early 1900s interpreted some Mayan writing to describe a catastrophic flood and a ‘destruction of the world’. This scholar made no reference to the Mayan long count calendar, December 21, 2012 or even if the events he described took place in the past or would happen in the future. Succeeding researchers in Mayan culture made reference to his ideas and later attributed the events to the end of the Mayan long count calendar. This was an untruth.

New age proponents and believers also associate the date to significant astrological alignments and events. In fact the date does not coincide with any significant alignment of the stars or planets. One of the ideas that is circulated is the alignment with sun and the centre of our galaxy at some point in 2012. This idea is mostly discounted by astronomers because of the fact that no one is really sure of where the galactic centre is located due to fact that it is obscured by cosmic dust, debris and millions of bright stars. It is also impossible to determine the exact boundaries of our massive galaxy and to identify how it is oriented – a crucial fact that is necessary to determine where the centre is located.

To further disprove this end world Mayan myth is the fact that the Mayans never made any emphasis that the world would end at the end of a long count calendar period. They viewed this as merely a changing of the clocks to mark the start of a new period. It was the Mayan form of the year 2000 for us.

The idea of the end according to the Mayans is also contradicted by the fact that they also referenced dates beyond our time and thousands of years into the future. Why would they talk about the distant future if the end would happen in 2012?

It seems like so many of us are always fascinated and intrigued about an absolute end to everything. Sometimes this obsession is so strong that it seems to drive the world towards a path of negativity. The biggest adrenalin rush ever has to do with so many people being caught up in the doomsday scenario.

We should be more careful of our ideas of an end to our world. If we continue to believe in a doomed end then we can be led to think that terrible events could and should happen to fulfill our beliefs.

What would happen if instead of a catastrophic end and doomsday we chose to believe in a better future life, peace and good will? So, do a little research for yourself on this topic of 2012 and the Mayan calendar and if you ignore the shallow hype and myths you will discover the truth about 2012. We will certainly have our challenges this year but it won’t be because of some hocus pocus myth, rather it will all have to do with we the people who inhabit this beautiful planet. Happy 2012 and may you do your very best to make it the best year ever for your loved ones.