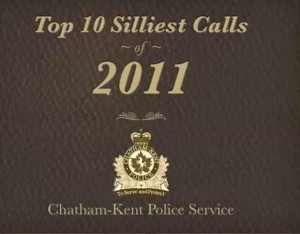 THUNDER BAY – Crimebeat – The Chatham-Kent Police Service present the Top Ten Silliest Calls in 2011. Though the course of their duties, many people call 911 for reasons that are not real emergencies. Constable Michael Pearce is the media officer for this innovative and creative police service.

The Chatham-Kent Police Service makes efforts to educate citizens about the importance of calling police when they observe crimes, suspicious activities, or have concerns that may be criminal in nature. On occasion, people call police in situations that don’t quite fit into these categories.

10) During a snow emergency in early February, a woman called police to complain that snowplows were cleaning her street and making too much noise.

9) A 17-year-old youth called police to seek advice. He wanted to know if he could disown his mother because she wouldn’t give him money.

8) A man called police because he found a roll of carpet on his front lawn and wanted an officer to attend his residence. He cancelled having police attend when he found out his wife put it there.

7) A woman called 911 after being denied entry to a local night club. She forgot her identification and wanted an officer to attend to query her name to prove to the security staff that she was of legal drinking age. When she was told police don’t do that, she argued that they should.

6) A man called 911 to request an ambulance for a friend. Before disconnecting the call, the call taker overheard a man in the background say, “Don’t worry, I’ll get rid of the dope”. Needless to say, police were dispatched as well. True to his word the man must have ditched the dope as officers didn’t find any.

5) A man called police when he saw a “small lion” cross the road in front of him. He was also quick to point out that he had not smoked any drugs… that day.

4) A woman called police to have a man removed from her residence. She no longer wanted his company after they were sharing a sofa to sleep on. She wanted the other end but the man wouldn’t switch.

3) A man called 911 to report that his vehicle was just stolen from his driveway. He provided a description and the direction of travel. Officers scoured the area but were unable to locate it until they attended his house and found it right where he left it. He attempted to cover his mistake by fabricating a story that the suspects returned the “stolen” car to his driveway and fled. Officers didn’t buy it. It turned out the man saw a vehicle just like his drive by his house and jumped to the conclusion his had been stolen.

2) Police responded to a 911 call when screaming was heard in the background during the telephone call to police. The investigation revealed that a couple were arguing because the man wanted to play XBOX while the woman wanted to play Nintendo Wii. The tipping point occurred when the man opened a new package of cigarettes when another package was already open.

1) A woman called 911 because her cats ate her Whopper and she wanted another one.

Dumbest Criminal of the Year: Have you ever slowed down or stopped to see what the police are up to? While an officer was parked in front of a house in a fully marked police cruiser, a driver pulled up and stopped to see what the officer was up to. The man got out of his vehicle to find out why the officer was parked in front of his friend’s house. As he walked towards the cruiser, he attempted to conceal a baggie in his hand. The officer saw this and the investigation revealed the man had three baggies of cocaine.

The 35-year-old Blenheim man was arrested and charged with drug possession.

Chatham-Kent has a population of 109,000, and has seen a twenty per cent drop in crime since 2000. One of the ways that this has been achieved is listed in a “Know your Rights” brochure where it states on ot the goals of the police service is having a POSITIVE ATTITU DE and OPEN COMMUNICATION with our community”. The service uses Facebook, Twitter, Youtube and a solid webpage that includes a daily update for residents outlining criminal activities in their area. Under the leadership of Constable Michael Pearce, the service is reaching out to the public to help fight crime in their community. Their goal of making their community the safest in Ontario is a goal that the service realizes takes greater community engagement to realize.