Home NNL Headline News A developing disturbance over South Dakota is forecast to intensify and reach... 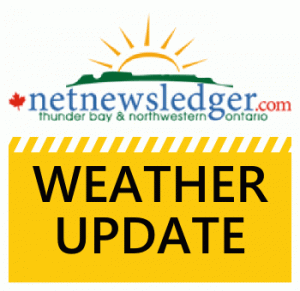 THUNDER BAY – It is not the kind of weather that most New Year’s Eve revellers would be hoping for, but Environment Canada is saying that snow and cold is on the way to Northwestern Ontario. “A developing disturbance over South Dakota is forecast to intensify and reach the Great Lakes Sunday morning. Appreciable snow is expected to blanket much of Northwestern Ontario today beginning this morning in western sections. The most significant accumulation is likely across the western and northern shores of Lake Superior with close to 15 centimetres possible, the bulk of which is expected from this evening through Sunday morning from Thunder Bay to Marathon”.

Five to ten centimetres of snow is forecast across remaining regions of northwestern Ontario by the time it winds down by early Sunday.

Much of Northeastern Ontario is also slated to receive in the range of 5 to 10 cm, with most of it falling on Sunday.