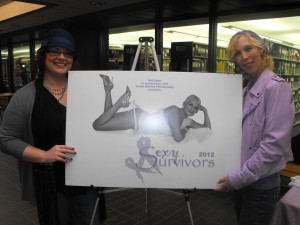 THUNDER BAY – Co-founders of Still Hope, Kim Coreau and Amanda Mihalus in association with Fiona Robinson of Visual Mantra Photography unveiled their “Sexy Survivors” Calendar 2012 on December 8, 2011 at the Hodder Tavern. Needless to say the not-for-profit organization sold over 120 Calendars to the anxiously waiting public that night, and the numbers of the sales have now soared to over 550. Still Hope, and The Northern Cancer Research Foundation have partnered together to raise money for Supportive Patient Care that will remain in Thunder Bay.

Kim Coreau , the mastermind behind the calendar and a survivor herself explained the purpose of the fundraiser, “We just want to give back to all women with all forms of the disease and to showcase how vibrant and sexy you can be, even after cancer. We just threw around ideas about how we would showcase each woman in her own setting ‘as sexy as they are’ and a Calendar seemed best fitting to do that.”

The 13 women featured in the Calendar range from the ages of 26 to 75 varying from all different forms of the disease and within each month have an important quote written by the model herself or one important to her.

The models felt very comfortable and had a lot of fun playing around with different costumes, hair, makeup and tons of accessories, “A big thanks goes out to Kim’s infamous ‘tickle trunk’ of goodies. The models were able to choose their own style and setting and it turned out unbelievable,” said Coreau.

She explained how amazing it was to meet so many people with various forms of cancer and how  it was liberating to model in the calendar alongside twelve strong and amazing women. “During this entire project I’m proud to say I have a new family.”

Fiona Robinson, the visual designer and photographer of “Sexy Survivors” speaks passionately about each model and how inspiring these women are. Fiona explained she has had no previous experience with cancer going into to the project and she was shocked at how much pride and compassion the models had on their own lives, “They’ve found the love, and they’ve found the humor, and it’s just so heartwarming to know they have a stable and caring support system in place that gives them strength.”

Amanda Mihalus, the Creative Director and Coordinator, described her thoughts on working on the fundraiser.

“We never thought it would take air like it did. It’s been so amazing working with these women and hearing each and every one of their stories. I can’t express how much emotion has surfaced since the beginning of this venture.  Making them look and feel beautiful and seeing that smile on their face that they might not have seen in a longtime is the most amazing feeling,” said Mihalus.

Amanda commented “Still Hope will strive to take the not for profit organization in any direction with the resources they have in place. We want to educate the public and make them more aware of different forms of cancer and the affect cancer has on families. We’ve all been touched in some way or form and we will do whatever it takes to create public support and take action.”

Still Hope has a very modest goal of $100,000 dollars within a five-year time-frame, and both women are positive that if this trend keeps up their goal will be met far sooner. 100% of the proceeds from the calendar go directly towards the fund in support of patient care.

Kim and Amanda hope in the New Year to create an emotional support group, a central hub, a place where survivors and those battling and their families can go. The hub will allow these individuals to discuss openly the disease, the effects on oneself and family and to let others know that they are not alone through healthy engagement within the group.

“The Northern Cancer Research Foundation is allowing us the ability to put our raised dollars to specific areas of focus that will remain in Thunder Bay for Supportive Patient Care; it is for those who aren’t able to afford simple necessities like a maid to clean your home when you don’t have enough energy after treatments. Or esthetics like wigs for women who believe they’ve lost their women hood due to surgery or chemotherapy. The struggle goes on and on, and we want to lessen that burden”.

We just want to give back and let them know that “There is Still Hope…Today Tomorrow and Always”.  – Kim Coreau and Amanda Mihalus