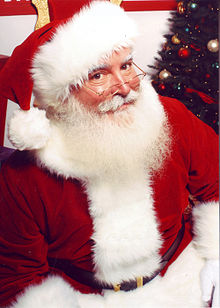 THUNDER BAY – Where is Santa Claus? For millions of young children around the world, headed to be filled with hope and excitement that soon their home will be visited by that jolly old elf, there is information for parents and children alike as to Santa’s whereabouts on Christmas Eve.

Once again Santa Tracking is in effect courtesy of Norad. So over the past year, as Santa has made his list and checked it twice, Norad has worked to ensure Santa a safe trip.

It all started because of a misprint in a newspaper ad. That early mistake has grown for over half a century into a Christmas Eve tradition. For more than 50 years, NORAD and its predecessor, the Continental Air Defense Command (CONAD) have tracked Santa’s flight across the globe.

In 1958, the governments of Canada and the United States created a bi-national air defense command for North America called the North American Aerospace Defense Command, also known as NORAD, which then took on the tradition of tracking Santa.

The process has taken on the latest technology online. Starting in 2009, children and their parents can use Google Earth to track the global journey of the jolly old elf and his reindeer sleigh as they make their way around the world.

First to welcome Santa will be pilots Captains Gregory Myers and Aaron Dhillon of 425 Tactical Fighter Squadron who will launch from 3 Wing Bagotville, Que., as the sleigh approaches Canadian airspace. Taking over escort duties as Santa makes his way into Western Canada will be the Commanding Officer of 410 Tactical Fighter Squadron, Lieutenant Colonel Christopher Hamilton and his wingman for this mission will be Captain Corey Mask of 4 Wing Cold Lake, Alta.

The Canadian Air Defence Sector Operations Centre at 22 Wing in North Bay, Ont., will alert NORAD when their radar and satellite systems detect Santa approaching North America. The two CF-18 Hornet fighter jets from 3 Wing will welcome Santa off the coast of Newfoundland and Labrador, then handover their duties as he nears western Canada to the two CF-18 Hornets from 4 Wing who will escort him ensure for the remainder of his Christmas voyage.

Starting at midnight MST on Dec. 24, website visitors can watch Santa as he makes all the preparations for his flight. Then, at 4 a.m. MST (6 a.m. EST), trackers worldwide can talk to a live phone operator to inquire about Santa’s whereabouts by dialing the toll-free number 1-877-Hi-NORAD (1-877-446-6723) or by sending an email. NORAD’s “Santa Cams” will also stream videos as Santa makes his way over various locations worldwide. Last year on Christmas Eve alone, NORAD “Santa Trackers” answered thousands of telephone calls and emails over a 25-hour period.

On Christmas Eve, you can stop by NetNewsledger.com to keep track of Santa’s journey, and make sure that your children or grandchildren are safely in bed before Santa’s arrival.