Home News Editorial Will Prime Minister Harper have the courage to act? 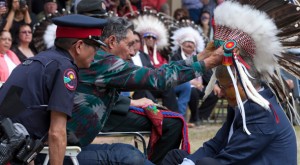 THUNDER BAY – Editorial – It is a record that should be one that the Prime Minister could hold up as a success. Since coming to office, Prime Minister Stephen Harper has sought to right the wrongs brought down on Canada’s Aboriginal peoples who suffered through the Residential Schools. One might not have realized it, but the Conservatives had also increased funding for First Nations. One also might not have realized that in Attawapiskat, that the Conservatives made right on a long overdue promise to build a new school in Attawapiskat.

The Blood Tribe in Alberta made the Prime Minister an Honourary Chief in June 2011. “It is a great privilege to be named an honorary Chief of Alberta’s Blood Tribe, a strong and proud First Nation,” said Prime Minister Harper. “I am particularly proud of this honour given it recognizes the efforts that our Government has been taking to help preserve the rich culture and heritage of First Nations in Canada while also investing in the future of Aboriginal peoples.”

The Conservatives along with the Assembly of First Nations appeared to be talking and making progress toward a better future. You might not have thought it, but the Conservatives were likely building up a solid account of political capital in the Aboriginal Affairs portfolio.

There is an old adage that leadership really shines when faced with a crisis.

The crisis came in Attawapiskat, when the Chief and Council declared a state of emergency.

Minister John Duncan responded, all joking aside, by sending an accountant. Interviewed by the media, the Minister appeared unaware of conditions on the First Nation and looked like the proverbial deer caught in the headlights.

The Conservative’s have, through December looked like Ebenezer Scrooge.

All that was needed was a “little cup of kindness”, sings Cathy Elliott, an artist and teacher who has spent time in the north. Talking to people from Attawapiskat, the people are not looking for massive handouts, they are looking for help.

That image of Minister John Duncan is likely to haunt the Conservatives.

By looking like he really didn’t know or understand what was happening in the community, Minister John Duncan has become the poster boy for Prime Minister Stephen Harper’s legacy on Aboriginal Affairs. In the course of the past month, all that potential politicial capital has been spent. The Conservative’s handling of the housing crisis in Attawapiskat has appeared very hamfisted.

It doesn’t really matter how much aid is now coming in to the community, the Conservatives, and now increasingly through the international media, and through the United Nations, Canada is being perceived as a country that doesn’t care about our Aboriginal peoples.

Right now, Minister Duncan has proven his skill level and compassion are not up to the task.

Fortunately for the Prime Minister, the Parliamentary Secretary for the Minister, Greg Rickford has boots on the ground experience on First Nations, and could step in and likely serve as a Minister who could do a better job.

All that is at stake is Canada, and the Conservative Party’s reputation.

Will the Prime Minister have the courage to act?