Home Anishinaabe I will be monitoring closely the situation of the Attawapiskat First Nation... 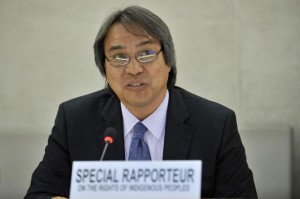 UNITED NATIONS – The situation in Attawapiskat has continued to grow legs. The conditions in the community located on the shores of James Bay has been getting increased international exposure. “I will be monitoring closely the situation of the Attawapiskat First Nation and other aboriginal communities in Canada, keeping an open dialogue with the Government and all stakeholders to promote good practices, including new laws, government programmes, and constructive agreements between indigenous peoples and states, and to implement international standards concerning the rights of indigenous peoples,” said James Anaya, the Special Rapporteur on the rights of indigenous peoples.

The independent United Nations human rights expert has asked Canada to clarify what it is doing to address the “dire” socio-economic conditions of the Attawapiskat aboriginal community, noting that many of its members live in unheated shacks or trailers, with no running water.

James Anaya said in a news release that he has been in touch with the Canadian Government to voice his deep concern about the conditions of the Attawapiskat First Nation, which he said exemplifies the conditions of many aboriginal communities in the country.

The Attawapiskat First Nation is a remote community in northern Ontario comprised of about 1,800 members. Mr. Anaya noted “That the poor living conditions are particularly serious as winter approaches the area, which faces winter temperatures as low as minus 28 degrees Celsius.The social and economic situation of the Attawapiskat seems to represent the condition of many First Nation communities living on reserves throughout Canada, which is allegedly akin to Third World conditions”.

“The social and economic situation of the Attawapiskat seems to represent the condition of many First Nation communities living on reserves throughout Canada, which is allegedly akin to Third World conditions,” he stated.

“Yet, this situation is not representative of non-aboriginal communities in Canada, a country with overall human rights indicators scoring among the top of all countries of the world.

In a communication sent to Canadian authorities yesterday, Mr. Anaya asked the Government to provide details regarding official programmes in place to address the disparate social and economic conditions of First Nations communities, as well as the disparate social and economic conditions between and among First Nation communities.

Humanitarian Crisis Looms in Afghanistan as Taliban on Rampage