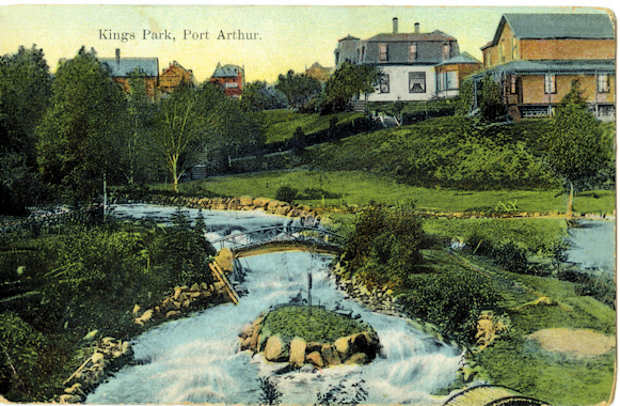 THUNDER BAY – This week, Tory Tronrud, from the Thunder Bay Museum shares, “One of the most attractive parks at the Lakehead wasn’t a city park but a private one created by Joseph G. King on his large property along McVicar’s Creek, near the Algoma Street bridge”.

“King, born in 1856 and arriving at the Lakehead in 1891, was best known for running the ‘hospital’ elevator that bore his name on the Port Arthur waterfront. It was used to treat wet and smutty grain so it could be sold and used productively”.

“After acquiring his North Algoma St. mansion in 1899, he spent ten years engaging his ‘love of flowers’. As an alderman in the first decade of the century, he was responsible for much of the beautification that occurred in Port Arthur. He died in 1910 but his park lasted a lot longer and appeared on many of the era’s postcards. Unfortunately, nothing remains of King’s Park today”.

The Thunder Bay Museum will be closed December 24th, 25th and 26th as well as on January 1st. Take some time over the holidays to enjoy some of Thunder Bay’s past. The Museum is open from 1-5 daily.