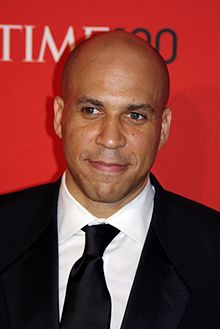 To the 1,103,371 people who follow Mayor Booker on Twitter, tonight they are receiving a steady stream of information, and help directly from this dynamic leader.

Using UberSocial for Blackberry, Booker is out in his community helping people in his community. twitter.com/#!/CoryBooker allows this modern Mayor the opportunity to get out from behind his desk and get things done. As of the 2010 United States Census, Newark had a population of 277,140, maintaining its status as the largest municipality in New Jersey.

Think of the impact that Mayor Booker can have, his Twitter following is almost three times larger than the population of his community. Does open and constant communication make a difference?

The Mayor is sharing images, information, helping people all from his Tweets. Booker is even doing it with a sense of humour which is likely something needed in his city.

“Snow in Oct, Earthquake, Hurricane, I think New Jersey needs 2 appease the weather Gods & sacrifice the TV show Jersey Shore. Cancel it!” is a recent tweet during the height of the storm.

Booker made news when on December 31, 2010, a constituent used Twitter to ask the mayor to send someone to her father’s house to shovel his driveway because her father, who was 65 years old, was going to attempt to do it himself. Booker responded by tweeting; ‘I will do it myself; where does he live?’ Other people volunteered, including one person who offered his help on Twitter and 20 minutes later the mayor and some volunteers showed up and shoveled the man’s driveway.[40] In 2010, Samepoint released a study that measured the social media influence of mayors around the country, and ranking the top 100 most social mayors. San Francisco’s Mayor Gavin Newsom was named the Most Social Mayor in America according to the Samepoint study. Newark, New Jersey Cory Booker was the second most social mayor, according to the Samepoint study. (Source: Wikipedia)

Booker is dedicated to his city, and it shows.

“Stand in Newark and you see and feel the dynamic change, the power and potential, you see that the future of America is happening here. We are not the Big Apple or Atlanta’s Georgia Peach. We are America’s Brick City — and this isn’t about our architecture. We’re Brick City because we’re tough, we’re resilient, we’re strong, we’re enduring and, most important, when we come together there’s nothing we can’t create,” stated the Mayor.

Booker was reportedly offered a role in the Obama Administration, but turned it down citing a dedication to Newark.

Tonight, as an early winter storm is trying to blow down Newark’s ‘brick house’ its Mayor is demonstrating how leadership can make a real difference.