Home News Editorial “I’m just gonna sleep in and have all the day to smoke... 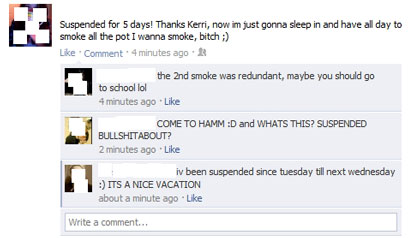 THUNDER BAY – Editorial – Things have sure changed in our education system from when I went to school. In high school in Manitoba, if you skipped a class, you got a detention. If you skipped more classes you could eventually end up suspended from class. That didn’t mean a holiday from school however, it meant that a student ended up in detention in the office, in some cases in the Vice Principal’s office, and you had extra work.

The goal was that a punishment was to encourage you not to repeat the incident that got you in trouble in the first place. Today, it looks like we have ‘New Detention’. Do you remember ‘New Math’? This looks like it was designed by the same people.

Today, when a student in an Ontario high school skips classes, they might get suspended. However that means the student is sent home.

Does that make any sense?

Take the instance on this photograph taken from Facebook earlier today. A high school student shares that she has been suspended from school. She gets, in her words, “I’m just gonna sleep in and have all the day to smoke all the pot I wanna smoke”.

Another student comments that she has been suspended since Tuesday, and how it is a “nice vacation”.

Seems that educators and legislators have turned the entire concept upside down.

If students see a suspension as a vacation, then our system is not doing its job, teaching students. Likely the idea is to bring the parents into the the mix, but in an increasing number of cases today, parents are working. That means all that the school is doing by suspending a student is giving them a holiday.

After a week away from classes, chances are the student will only be a week further behind the rest of the class, and more likely to skip classes again, and get another ‘vacation’.

The question taxpayers should be asking is why?