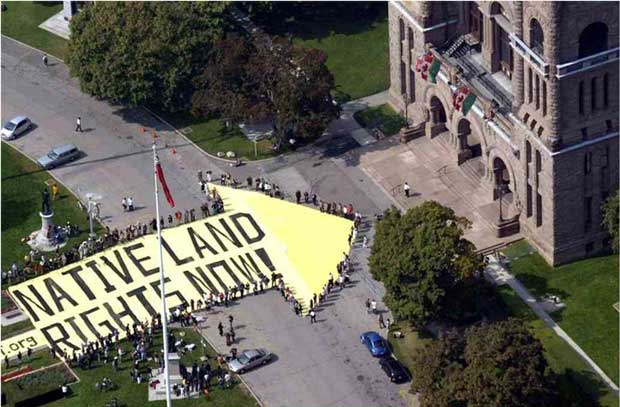 THUNDER BAY – The Kitchenuhmaykoosib Inninuwug First Nation is demanding a stop to mining activity on what Band Chief Donny Morris says is a sacred burial ground on the traditional lands of the KI First Nation.

“Our ancestors deserve a place where they can rest undisturbed. People everywhere understand that cemetaries are sacred places. But, in Sherman Lake, they want to put a gold mine on one,” stated Morris.

The First Nation says that the mining camp was discovered by hunters, and they suspect it is God’s Lake Resources who worked the site.

Morris states that “Government officials say that they are powerless to stop God’s Lake from working their claims inspite of KI’s Indigenous Title, Rights, and sensitive spiritual connection to the area”.

Suggesting that this situation, left unresolved could lead to greater action, Morris says this growing conflict closely mirrors the events that led to his and five other KI leaders being jailed in 2008.

Nishnawbe Aski Nation (NAN) Grand Chief Stan Beardy stands in support of Kitchenuhmaykoosib Inninuwug (KI) First Nation in the community’s call for the Premier of Ontario to step in to halt mining activity within their traditional territory.

“Ontario must take action to preserve its relationship with the First Nations in Ontario’s far north,” said NAN Grand Chief Stan Beardy. “Ontario must respect the United Nations Declaration on the Rights of Indigenous Peoples, supported by Canada, which states that free, prior, and informed consent is required from First Nations. This province is failing to recognize First Nation jurisdiction over our homelands.”

In 2008, KI leaders (referred to as ‘KI6’) were sentenced to six months in jail for civil contempt of court after disobeying a court order allowing the junior mining company Platinex Inc. to access KI traditional territory, without the consent of the community.

“First Nation leaders have the right to exercise their jurisdiction by protecting their homelands. They should not have to lose their freedom because of the government of Ontario’s failure to properly consult and accommodate First Nations,” said Beardy. “NAN urges Ontario to take this call by KI very seriously to allow for peaceful
coexistence, and we support the community’s actions on this issue.”