THUNDER BAY – It was a full weekend for Thunder Bay Police. Over the Labour Day weekend, police responded to 727 calls for service, and made 44 Liquor Licence Ace arrests. Investigators are looking into two separate robberies of convenience stores:

A female armed with syringe robbed the Mac’s Mart at 640 South Waterloo Street on Monday September 5, 2011 just before 1:00 p.m. No one was injured and the female made off with an undisclosed amount of cash. The suspect is described as a Native Canadian female approximately 5’5″ tall. She was wearing a black sweater/hoodie, black pants, sunglasses, ball cap and white runners.

On Friday September 2, 2011 a male robbed the Mac’s Mart at 394 Oliver Road just after 9:30 p.m. It was alleged that the male pushed an employee in the store when confronted about merchandise that was apparently hidden in his shorts. There were no injuries and the male fled the scene. The suspect is described as a Native Canadian male approximately five foot to five foot ten, thin build. He was wearing a white t-shirt, long plaid shorts, ball cap.

Visit Crimemapping on NetNewsledger.com to view the locations and descriptions of crimes reported by the Thunder Bay Police. If you open the tab for crime types, you can choose what specific issues you would like to know more about. You can check your neighbourhood, or near where you work. You can also set the time frame for viewing what crimes happened as well.

You can also go online at Crimestoppers and report information on a crime, if your confidential information leads to an conviction you may be eligible for a reward.

Here is the Crimemap for the Northward from September 2nd to 4th. 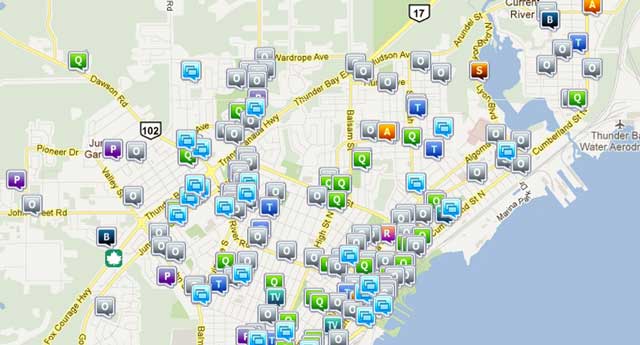