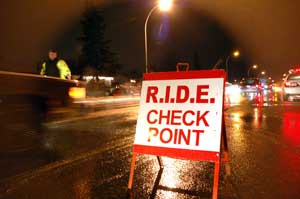 THUNDER BAY – A RIDE Program run on Thursday, September 1st resulted in approximately 850 vehicles being stopped at the designated checkpoints. The Thunder Bay RIDE program stops were set up along Memorial Avenue, and several other routes known by police to be frequented by impaired drivers. Officers with the Thunder Bay Police Service who participated in this program handed out two impaired driving charges, three 72-hour licence suspensions, one 24-hour licence suspension and 36 Highway Traffic Act violations.

The program consisted of three checkpoints set up between 10:00 p.m. and 3:00 a.m. throughout the City of Thunder Bay on Thursday, September 1. CAANEO staff members were also on site to distribute tire gauges and CAANEO discount vouchers as a token of appreciation to all non-impaired drivers.

The participating police officers also used this R.I.D.E program to ensure motorists were abiding by the recent changes to Ontario’s driving laws. Under the most recent change, which took effect December 1, 2010, police officers may impound a vehicle for seven days when a driver is found to have a blood alcohol concentration greater than 80 milligrams, or if the driver fails/refuses to provide a breath sample.

“The Club-sponsored R.I.D.E. program helps to prevent the irrevocable damage that all too often is caused by impaired drivers on Thunder Bay’s roads,” said Korey Kennedy, Manager of Public & Government Affairs for CAA North & East Ontario. “By being visible and taking a proactive approach to this problem, the Thunder Bay Police Service and CAA North & East Ontario are continuing to convey the message to motorists that impaired driving is a serious crime with costly consequences.”

CAANEO and the Thunder Bay Police Service remain committed to eliminating impaired driving and believe that local R.I.D.E programs reiterate the seriousness of this matter and the message that this behaviour will not be tolerated.

CAA North & East Ontario and the Thunder Bay Police Service ask everyone to make the responsible choice before getting behind the wheel – if you drink, don’t drive.