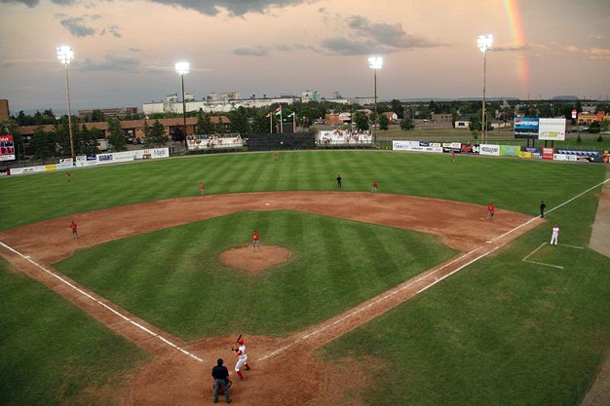 “You could feel the excitement building all week as the community got behind us and pushed us over the top”, said Larry Hebert, Chair of the Board of the Thunder Bay International Baseball Association (TBIBA), “We are now one step closer to winning a competition that would help to reinforce our reputation as one of the best sports cities in Canada”.

Forty ball parks from all across Canada were put forward in the competition. Over the past few months, online voting has eliminated 37 parks. Port Arthur Stadium will compete against the winner of Trois-Riviéres – Stade Fernand-Bédard and London, Ontario’s Labatt Field in the finals. Final round voting will begin at www.baseball.ca at noon on Tuesday August 23rd and run for the two weeks ending on September 7th.

“We are looking forward to the next round”, said John Cameron, Tourism Officer for the City of Thunder Bay. “The spotlight of being in the final of this national competition will further promote the facilities and community support that Thunder Bay has to offer to host national and international events for baseball and other sport tourism opportunities”.

“We have had tremendous support from all branches of the local media, said Jeff Halvorsen, Vice President of the TBIBA.
“We’ve also gathered together a great volunteer team that has been working social media and other media channels to drive people back to the Baseball Canada site to vote. This has been great fun.”