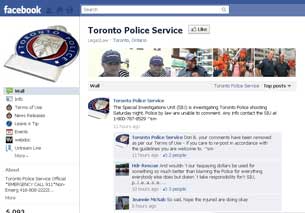 THUNDER BAY – Is Social Media important? Do Twitter, Facebook, and the Internet have uses for Law Enforcement?

In today’s ever connected world, police services are often staffing a cyber-crime unit.

Many however are lagging greatly when it comes to using social media to communicate with the public. That is a move likely starting to end. In Toronto, the Police Service has embraced social media as a new way of serving their community.

The Toronto Police Service has determined that it is critical for police officers to be able to communicate with the public.

Chief Blair says that “This provides us with a forum that relationships can be built”. Social media is being seen, by the Toronto Police, as a tool for creating new opportunities.

The Toronto Police Service has, it appears, in Deputy Chief Peter Sloly, a champion for greater engagement. The service has completely re-done their website, added Youtube videos, a Twitter feed, and a Facebook feed.

Deputy Chief Peter Sloly said he was turned on to social media after attending the Social Media the Internet & Law Enforcement (SMILE) conference in Washington, D.C in April 2010.

“I signed up for my first Twitter and Facebook account at that conference and I have to tell you that, the first time I put my fingers to the keyboard and sent out my first tweet, I held my breath because I thought this could be the end of my career…It has really expanded my connection to my community in the city and across the GTA and increased my reach globally”.

“The biggest change for us (with the new technology) is our culture. We are not used to this type of decentralized, high-speed, highly interactive information-sharing environment. Traditionally, policing is a very hierarchal and para-military culture. We don’t give our frontline people a lot of opportunity to speak on behalf of our organization. This is changing all of that and because of that radical change, it made people like me very nervous. It took a lot of convincing and once the lights went on in my head, the lights went on right across the police service. ‘What I love about this approach is that it’s bottom up. It’s our frontline people — those responsible for public safety and interacting with the public – that are telling us that this is the way we need to go”.

“…What we are doing here today doesn’t mean that we are moving away from our commitment to mainstream, community and ethnic media. It means we are expanding our horizons and bringing more people into the house to deal directly with their local police.”

In Toronto, the effort isn’t limited to the Police Executive either. Traffic Service Sergeant Tim Burrows shares, “Managing your reputation begins with putting your best foot forward and the next step is that you have to make sure you are listening to what people are saying. Ensuring that you are there in the social space to address the community concerns, compliments, comments, and criticism is extremely important to ensuring that you are on top of protecting your reputation and doing everything you can to mitigate potential risks”.

“You need to have policies in place that ensure the ground rules for your members are laid out. Don’t create cumbersome policies that restrict every movement and remember that you already should have many policies and governance pieces that define appropriate behaviour, decorum, and language already. Your policy needs to address social media use, not duplicate what’s already in place,” adds Burrows.

In Thunder Bay, the Thunder Bay Police Service has not, yet developed a social media strategy in a formal manner. In a community where there are over 70,000 people using Facebook, it is likely going to be something that new Chief of Police J.P. Leseque will be examining. The City of Thunder Bay, led by the Tourism Department, has been developing a growing social media and Internet strategy.


That is not to suggest that the TBPS has not been working on having an Internet presence. On www.kidsncops.ca the Thunder Bay Police Service took a bold step forward. However initially, for young people to join the site, which also encouraged youth to report criminal activities, it required parental permission. That likely reduced the potential effectiveness as a young person who might be suffering from abuse in the home, for example, would be less likely to participate.

The City of Toronto boasts 2,562,320 Facebook users. That is out of a population of about 5,500,000. About half of the population. In Thunder Bay, there are 21,780 people on Facebook from 13-18, and a total in the city of 72,640 people listing their home city as Thunder Bay. The social media potential for Thunder Bay Police Service to engage online is massive.

Thunder Bay is an increasingly engaged community. It only makes sense that the Thunder Bay Police Service has a growing online presence.