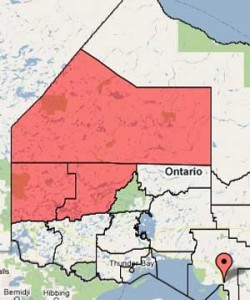 THUNDER BAY – The weather is helping fire fighting efforts. There are communities awaiting the “all clear” from the MNR so they can return home. Nishanawbe Aski Nation (NAN) Grand Chief Stan Beardy told NetNewsledger.com that there are still hotspots showing on the infra-red images, and fires could flare up if the weather changes again. While the people waiting to head home to their northern communities are determined to head home as soon as possible, the word is safety first.

One of the Grand Chief’s efforts, has been seeking ways to keep people busy. Last night the Victoria Inn was the host to Rolling Thunder, a gospel group from Nashville with a troupe of over twenty people who were entertaining and witnessing to the people from Sandy Lake.

Sometimes too, it is the small things that, for many evacuees, make a real difference. Lydia Big George brought in a box of freshly made bannock to last night’s event. Without a word spoken, young people and Elders from Sandy Lake were enjoying this tasty treat.

On Sunday, the MNR reported, “The Emergency Medical Assistance Team (EMAT) staff and equipment, which had been set up in Thunder Bay to help during the evacuations, is being moved to Geraldton (part of Greenstone) to help support the more than 1,000 evacuated residents hosted in that community”.

There have been concerns raised over how family and communities have been separated during the evacuation. This has happened, partly it appears because of the timing of the evacuations, but also perhaps because there needs to be a more solid plan in place for evacuations.

The Ministry of Community Safety stated Sunday, “Keeping families and communities together has been a priority during the evacuations. Registration lists are being shared among all host communities to make it easier to locate and reunite family members who may have become separated”. The Canadian Red Cross has also set up a central registry to help residents of evacuated communities locate family members. The contact number for the Red Cross registry is: 1-866-356-3645 ext. 236.

There have been instances where families have been separated with husbands in Thunder Bay and their wives in Marathon. Some of those situations came about due to people with medical issues being moved early in the evacuations. That is an area where NAN, the province and the City of Thunder Bay need to be working together to develop a better process for future evacuations.

For the next few days, the weather forecast continues in favour of firefighting efforts.