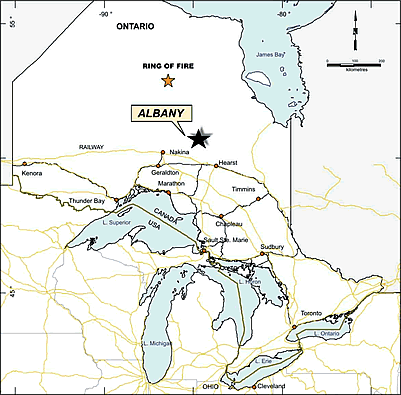 THUNDER BAY – Both sides have reached an agreement which has ended court action and put forward the opportunity for future economic development in an agreement both sides are calling shows “mutual respect”. Chief Roger Wesley of CLFN stated, “We are pleased to have reached an Agreement with Zenyatta. It reflects the mutual respect that has developed between us and we look forward to building a strong relationship to realize the benefits and opportunities from the mineral exploration on the Albany Project in our traditional territory.”

Zenyatta Ventures Ltd. and Constance Lake First Nation (CLFN) have announced that they have signed an Exploration Agreement (“Agreement”) for a mutually beneficial and co-operative relationship regarding exploration and pre-feasibility activities on the Albany Project. Having signed an Agreement, the Motion for Injunction has been dismissed.

Among other things, CLFN will participate in an implementation committee and receive, along with certain other First Nation communities, preferential opportunities for employment and contracting. Zenyatta will also contribute to a social fund for the benefit of CLFN children, youth and elders.

Aubrey Eveleigh, President and CEO of Zenyatta, stated “We recognize the aboriginal treaty rights and the importance of the traditional lands to the First Nation people. We also realize that mineral exploration must contribute to the benefit of all parties involved. Zenyatta looks forward to working cooperatively with Constance Lake First Nation, other First Nations and local communities on the Albany Project. We feel that active participation and a close relationship with First Nation communities creates sound business opportunities. The Company is focused and committed to Northern Ontario and has always accepted responsibility for strong community relations.”

“I’d like to add my congratulations to Zenyetta Ventures and Constance Lake First Nation on the signing of an exploration agreement related to future opportunities on the Albany project. This is another positive example of the potential benefits a community and a company can achieve by putting agreements such as this in place. I wish both partners all the best as they move forward to see this economic opportunity provide benefits for everyone in the future,” shared Michael Gravelle, Minister of Northern Development, Mines and Forestry and MPP for Thunder Bay-Superior.

Zenyatta Ventures Ltd. is a mineral exploration company based in Thunder Bay, Ontario with projects in the Canadian Shield of Northern Ontario, Canada. Constance Lake First Nation is a community of 1,470 members of Ojibway and Cree ancestry located in the District of Cochrane, 32 km west of Hearst, ON. CLFN is a progressive and active community that encourages, supports and promotes local business development, job creation and economic development as keys to their success.

Mining Sector Coming Back in 2014

Wanting a return to “normal”, many struggling Indigenous businesses are showing strength, resilience, and...