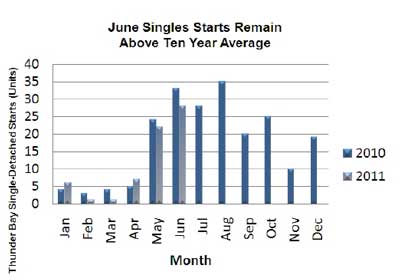 THUNDER BAY – Housing starts in Thunder Bay in June were up. Canada Mortage and Housing reports that fifty two units started in June in Thunder Bay CMA according to preliminary data. The June totals surpassed both the ten-year average for single-detached and total housing starts. After a slow commencement to 2011, year-to-date total starts now register 99 units, nearly 30 per cent ahead of the same period last year.

“The condominium unit starts in June represent the first such project started since 2007,” noted Warren Philp, Northern Ontario Market Analyst with CMHC. “The 24 units become the latest of the nearly 850 condominium units build in Thunder Bay since 1987, most of which have been apartment condominium units,” explained Philp.

At the national level, the seasonally adjusted annual rate of housing starts was 197,400 units in June, according to Canada Mortgage and Housing Corporation (CMHC). This is up from a revised 194,100 units in May 2011. April 2011 has also been revised to 194,100 units. “Housing starts increased in June due to an increase in single and multiple starts in Ontario,” said Bob Dugan, Chief Economist at CMHC’s Market Analysis Centre. “The revised numbers show that housing starts have been above their trend line since March. However, we expect housing starts to move back towards levels consistent with demographic fundamentals in the near term.”

Rural starts were estimated at a seasonally adjusted annual rate of 22,800 units in June.