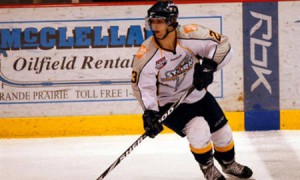 THUNDER BAY – The Lakehead University hockey team has added another defenceman to the line-up, as Mitch Fillman has committed to the Thunderwolves.

Fillman, a native of Oakville, Ontario, stands 6’3” tall and weighs 205 pounds. He played in 147 games over three-plus years with the Saginaw Spirit of the OHL as both a forward and a defenceman. Mitch finished up his junior career with the Grand Prairie Storm of the AJHL, scoring 7 goals and 12 assists in 32 games and was named the team’s top blue-liner. He also appeared in one game as a pro with the Tulsa Oilers of the Central Hockey League.
Grand Praire Head Coach Blaine Blablitz said “Mitch was a great addition to our team last year – he played both forward and defence and did an amazing job at both positions. But once he got back on the blue-line, he became a dominant player. He was our best defenceman and arguably the best defenceman in the league. There were nights when it looked like he was a man amongst boys.”

Mitch is now looking forward to attending Lakehead University. “After meeting with the hockey staff I knew this was the place I wanted to be to pursue my academic and hockey careers,” Fillman said. “Lakehead is a first-class program that is committed to winning. It’s exciting to join a team that competes for a championship every season.”

Thunderwolves Head Coach Joel Scherban is equally enthusiastic. “We’re excited to have Mitch join our program,” Scherban said. “He’s a tough, physical, stay at home defenceman who has made a quick transition from forward to the blue-line over the past two seasons.”