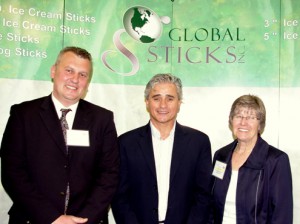 The company worked in partnership with the Thunder Bay Community Economic Development Commission (CEDC) to find a new home for their operations after discovering the abundant supply of white birch in Northwestern Ontario. “After years of hard work and planning, we are so happy to be opening our Oliver Paipoonge facility,” said Reggie Nukovic, President of Global Sticks Inc.

Additionally, Stormax International Inc., an investor in Global Sticks, will also be starting operations in the facility. The company is a manufacturer of machinery that specializes in the production, packing and stacking of freshly made ice cream sticks. Stormax currently employs 10 people and is projected to create up to 15 jobs in the future. In total, 145 potential jobs could be created by these two companies. “We wanted to be close to a novelty wooden stick manufacturer because it will help in terms of innovation and making continuous improvements,” said Hans-Erik Aamand, Vice President of Stormax.

“It’s a mutually beneficial relationship, and we are so thankful for all of the support we have received.”

The Global Sticks Inc. factory will produce up to six billion food-grade wood sticks each year from northern white birch, a species that is underutilized by the forestry industry. The decision to relocate to North America came as a result of the recognition that manufacturing wooden sticks in China was going to become a much more difficult and expensive process given increasing fuel costs. With assistance from the province, Global Sticks will switch from sourcing products from China to manufacturing products at a new, state-of-the art facility in Thunder Bay that created 50 construction jobs. The new plant will produce a variety of wooden sticks used for ice cream bars, corn dogs, tongue depressors for doctors and nurses, and paint paddles.

“This grand opening marks another positive step forward for the new Thunder Bay economy. The establishment of Global Sticks Inc. paves the way for opportunities for other value-added forestry related companies to locate in our area,” said Steve Demmings, CEO of CEDC.

“These new facilities have helped with the creation of 50 construction jobs currently at the site, will be home to approximately 130 permanent jobs for Northerners right here in the Thunder Bay area. Global Sticks represents a diversification of the wood products industry in Northwestern Ontario, and will provide tax base support to the residents of Oliver Paipoonge,” stated Bill Mauro, MPP Thunder Bay-Atikokan.

“I’m delighted that our government has helped Global Sticks find a home in Northern Ontario. The new Thunder Bay plant will manufacture products that were previously out-sourced from China, bringing those jobs and opportunities to our region,” enthused Michael Gravelle, Minister of Northern Development, Mines and Forestry and Chair of the Northern Ontario Heritage Fund Corporation (NOHFC).

“The support provided to Global Sticks by the McGuinty government and its ministries has been vital to the start up of Global Sticks production. Global Sticks and its value added manufacturing process will continue to make investments and further expansion at the new plant and the region of Northern Ontario,” added Reggie Nukovic, Global Sticks Inc. President. “We at Global Sticks are thankful to Thunder Bay and the McGuinty Government for their continuous support, provided especially by Michael Gravelle (NOHFC) and Bill Mauro. Without this support we would not be here today,” shared Hans-Erik Aamand – Vice President, Stormax International Inc.