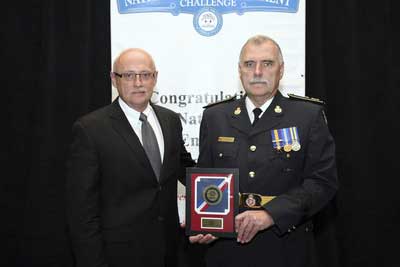 THUNDER BAY – For the third consecutive year, the Ontario Provincial Police (OPP) Provincial Traffic Safety Program (PTSP) was recognized by the International Association of Chiefs of Police (IACP) at its annual conference.

At the annual conference in Orlando Florida, the OPP received the IACP 2010 International Traffic Award for leadership in promoting traffic safety programs.

The PTSP is the benchmark of excellence by which the OPP delivers all of its highway safety initiatives across the province.  The program utilizes an intelligence-led-policing approach to target the three leading causes of injuries and death on Ontario roadways; aggressive driving, impaired driving and occupants not wearing safety restraints.

“We are proud to be the recipient of this prestigious international award,” said Deputy Commissioner Larry Beechey, Provincial Commander responsible for Traffic Safety.  “Receiving this award is a testament to the dedication and commitment our officers demonstrate every day to keep our roads amongst the safest in the world. ”

Chief Superintendent Bill Grodzinski, Commander of the Highway Safety Division says, “The diligence of every single officer who works toward our traffic safety goal is paying off. Being recognized for our continued success among international police agencies is truly an honour.”

Since the OPP implemented the PTSP in 2007, Ontario has seen a reduction in the number of fatal and personal injury collisions in the province. After the first full year, in 2008 the OPP saved 131 lives, and in 2009, a further 12 lives were saved.  These rates are the lowest Ontario has seen in 80 years.