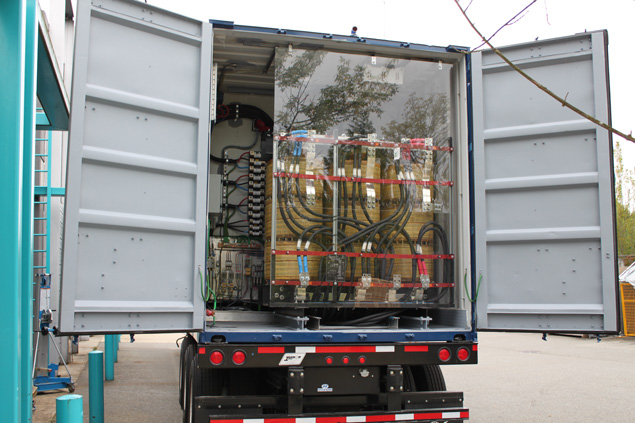 BURNABY, B.C. – It’s the size of a tractor trailer, it’s on wheels and completely transportable, with the capacity to power a small town. And now the world’s largest hydrogen fuel cell – one of the world’s cleanest and greenest sources of energy – will soon be on its way from Burnaby, B.C., to Eastlake, Ohio for a five year trial run – the first ever deployment of its kind.

The deal between Ballard Power Systems and Ohio’s FirstEnergy Generation Corp will allow the U.S. utility to activate this fuel cell generator – known as CLEARgenTM and based on Ballard’s proton exchange membrane (PEM) technology – during periods of peak demand, taking strain off the power grid and ensuring uninterrupted power to customers during the summer when demand is highest. The fuel cell system is capable of generating up to one megawatt of power – enough to power 500 homes on its own.

“It’s a huge leap forward and a significant first for Ballard,” said Michael Goldstein, Ballard’s Chief Commercial Officer. “More importantly, we believe this deal helps ensure that fuel cell technology will be an integral part of the clean energy solution identified as a priority by President Obama.”

Because fuel cells use hydrogen to generate electricity – producing only heat and water as by-products – they are a far more environmentally-friendly means of generating power than diesel or coal. And because the Ballard generator is transportable, it can be relocated to other sites on a seasonal basis.

Not only is Ballard’s CLEARgenTM useful for utilities, it can also provide a clean energy solution to remote communities in Canada and around the world, which are too far from the electrical grid and forced to rely on noisy, dirty diesel generators for power.

It’s also capable of running off by-product hydrogen from chemical plants to generate clean electricity for sale to the power grid or to power the plant. That’s exactly what Ballard will now be doing with K2 Pure Solutions at their bleach plant in California.