I have recently experienced something that I can only ascribe as being divine benevolence, and I feel it’s something I should elaborate on because it holds a major key to happiness. After all, happiness and freedom are two things that everyone on Planet Earth would like to attain, but few honestly ever find them.

First off, we must clarify and recognize the things that do NOT bring us happiness or lasting contentment in life. Let’s take the most over-hyped and obvious element that people tirelessly think will lend itself to attaining happiness: Money.

Money is absurdly over-emphasized and blown out of proportion as being a key to happiness in everything from movies to books to TV to media across the board. This, as has been proven time and time again, is a crock. Money does enable a certain level of freedom, but in itself it does not create happiness.

Money is an inanimate object, a means to an end. Money therefore is not the end itself. So it can be argued that you do not need money: What you really need is what money can get you. You need the end result.

I have seen this time and time again in my own life. For some great, benevolent reason, I get all that I need in life time and time again, very often without money even being involved in the process. After all, I don’t slave away on the spinning wheel of the rat race, and in so saying I don’t have a lot of monetary wherewithal. Still, all of my cupboards are full of healthy food every week, all my bills are paid and I lack in nothing. A lot of my friends watch on in wonder, asking me what the catch is. I tell them all the same thing: I have the favour of God Himself.

Now, I know that isn’t something that a lot of people would like to hear, and to be honest I could really care less in that respect. This, after all, is my story. This is the lowdown according to Yours Truly. If some folks can’t handle the divine aspect of it, just turn the page and move on. Regardless, this deal works for me, and so I feel compelled to tell it to anyone who might have an ear to hear. After all, maybe someone else out there might find their own key to happiness upon reading my example.

The real catch, I have found, is something I can only term as being OPPORTUNITY. You see folks, money cannot buy you opportunity. It is either given to you, or it is not. The door is either opened to you, or it is not. Cold, hard, simple fact.
There are tons of people out there that would literally kill to receive a world of opportunity: For someone to give them the stage to show what they can produce in the spotlight. Hell, Hollywood alone is chock-full of buxom blondes who can underscore that last statement! And not only actress wannabes, there are millions of people from all walks of life who would do anything to have a golden opportunity handed down to them.

The gimmick is, you have to understand and humbly appreciate the fact that opportunity is indeed handed down. It has nothing to do with you forcing a door open or showing up and saying, ”I have arrived!” It doesn’t work that way.

Nope, opportunity knocks, as the old saying goes. It requires someone on the other side to open a door for you to walk through. And really, why should the door be opened for YOU in particular? There is a good question to ponder and answer, because I’m not saying that paying your dues doesn’t figure into the equation on many an occasion. Plus, I have found that karma takes care of its own. You reap what you sow, and all rivers run into the sea.

Therefore, if you want the door to opportunity to be opened to you, you must first be in harmony with life itself along with your fellow man, being true and honest, because like attracts like. Quality comes to quality, but that said, quality takes time to cultivate and ripen.

Having stood the test of what you are truly made of, and having found quality of true stock within yourself after withstanding your trial by fire, the door of opportunity begins to beckon. It is almost as if God Himself says, ”Psst! Over there, see that door? It’s ajar, go take a look!”

Happiness is not handed down to us. It is a process that requires finding, and there are key elements and universal truths that mark the way. Few ultimately find the gold at rainbow’s end, but then again, few are willing to go the distance.

The door of opportunity is worth seeking out, so get busy. Because life is short, and yours is ending one minute at a time. 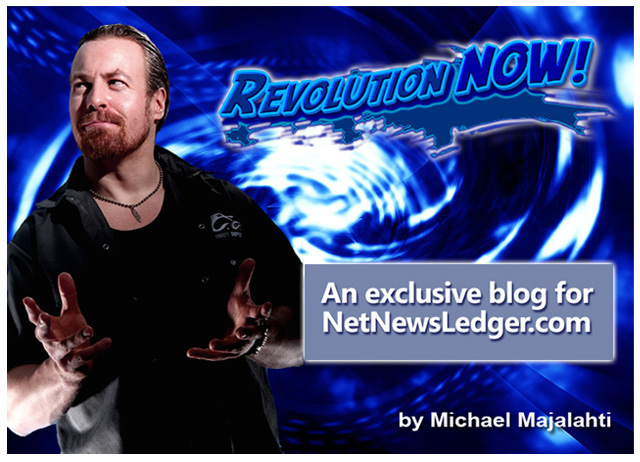 To learn more about Michael, and read some of his other endeavors, visit his MySpace.